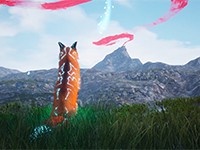 Spirit Of The North

The PS5 will have its full version of Spirit Of The North after the console launch, and we are not talking about it in the way of an update from the PS4 as many of the other games will be getting. This will not just be an update that will make the game run on the new system but an edition that will upgrade all of the visuals and the ability to see the game run in glorious 60 fps. Not something that we have ever seen for this one and it makes me excited to see the Spirit Of The North: Enhanced Edition drop on November 26th digitally and then a physical edition of the game on December 4th. Right around the time we should be looking for more to play on the system.

In addition to the new visuals for Spirit Of The North, there will also be two more skins that will be exclusive to the PS5. A Black Marble and Champagne skin for us to don while going through the game. If that is not enough, there is the Signature Edition for Spirit Of The North that will be the physical version that will come with some pins, a soundtrack, an art book, and a certificate of authenticity. For some reason that is needed even though there is not much else going on in the package that would require it. Maybe it is just what I am seeing here for now.

Merge Games and the North Carolina-based development team, Infuse Studio, are ecstatic to announce their first release on PlayStation 5 will be Spirit Of The North: Enhanced Edition. Customers will be able to purchase Spirit Of The North: Enhanced Edition digitally through the PlayStation Store on November 26th and as a physical copy on December 4th.

Alongside this already fantastic news, Merge Games is excited to reveal that Spirit Of The North: Enhanced Edition will be available as a Signature Edition game, and that it will also be the world’s first ‘Indie Collectors Edition’ for PlayStation 5. The Signature Edition version will include a region free copy of the Spirit Of The North: Enhanced Edition, an original soundtrack CD featuring 14 tracks, 2 exclusive design pins, a numbered certificate of ownership, and 36-page Lore and Art Book showcasing dozens of new and never seen before sketches.

Spirit Of The North: Enhanced Edition, is a 3rd person casual adventure, with stunning landscapes inspired by those in Iceland and its story by pieces of Nordic folklore.

Awaken the slumbering spirit of the north and begin a quiet journey of companionship and discovery. Play as an ordinary fox whose story becomes entwined with The Guardian of the Northern Lights, a magical spirit fox. As you journey over the mountains and under red-stained skies, you’ll discover more about your companion and a land left in ruin.

Spirit Of The North has been uniquely designed to purposefully have no dialogue or narration. Players must breathe in their surroundings to solve various puzzles and speculate the meaning of a lost ancient civilization. Overall giving players an emotional and fulfilling adventure through stunning visuals and an ethereal score.

Is Spirit Of The North a title you were expecting to make it over to the next-gen systems or did you think it was going to be left to backward play? Will you be going for the physical edition of the game or will you just stick to the digital to enjoy it all again? When do you suspect it will hit the Xbox Series X if at all? Let us know your thoughts down in the comments. If there is more for Spirit Of The North, I will share it all here for you. Please keep checking back in here for that and anything else that we have to offer up.