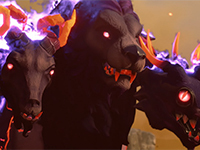 Gods do we have a way to end the week here with a huge update for Immortals Fenyx Rising with so many angles to look at for it. This is not something I was fully expecting out of Ubisoft, but I know I am glad to see it as we have a whole lot of story to look at and then gameplay to show off how some of this story will be played out. I mean, that may not be everyone's jam as they will want to play Immortals as blind as possible but I am sure that is a small group out there. More so when you realize that there is a demo out there for the game on Stadia to get some of us up and running in the game.

As the story goes, it looks like those Immortals, the Greek Gods, have been removed from power by Typhon and it will be up to Fenyx to head out into the ancient world to try to free them all and restore their power. All while platforming through various islands, solving puzzles, and taking down various enemies. Some very basic and others can be a bit more on the difficult side. We do get to see the Wraith of Achilles here and he looks to be corrupted to stop Fenyx from restoring everything for the Immortals. All with some interesting mechanics that could make that fight, and others like it, easier if we are so inclined to search around in Fenyx Rising.

Zeus and Prometheus share the tale of Fenyx, a young shield bearer washed ashore on the Golden Isle, the only one who can reunite and save the Greek gods from Typhon, the deadliest titan in Greek mythology.

Check out the Valley of Eternal Spring, domain of Aphrodite, where you’ll re-enact tangled myths, ride tamed stags, and smash monsters while trying to free the goddess of love from a leafy prison. See what happens when you challenge Achilles on his home turf, watch us get a makeover from Hermes, and witness Fenyx’s humble first steps onto the gloomy, monster-infested island of Clashing Rocks.

As mentioned above, there is also a demo out there for Immortals Fenyx Rising for those looking to play the game over on Stadia. A demo that you can play now for free and until October 29th if you so choose. It looks to house a lot of the gameplay sections we have above to experience so there should be little spoiled on the game beyond that. Granted, you have to be on Stadia to experience it and I do not know too many gamers out there that are. Maybe Immortals Fenyx Rising will drive a few players over there but I know I will be waiting until it hits the more mainstream platforms out there in December.

In this demo, play as Fenyx, a new winged demigod, on a quest to save the Greek gods and their home from a dark curse. Explore the brand new archipelago inspired by Aphrodite, the goddess of love, and solve the mysterious secret of the cyclops.

Are you going to be giving the demo of Immortals Fenyx Rising a go on Stadia or will you be in the same boat as I and be waiting until the full launch? How do you like the humor that is brought in for it all and will that work throughout the whole story here? Are you glad to see that we are not going to be getting the same kind of villain story when it comes to the topic of the Greek Religion? Let us all know down in the comments and then feel free to discuss it all as you wish. If there is more to share for Immortals Fenyx Rising, you know we will share it all here. Just be sure to keep checking back in for all of that and more.