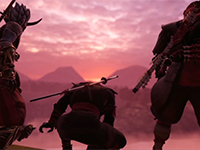 It can be fun to learn about where many of our favorite video games or their franchises started with given the longevity of some or, in the case of Aragami, the recent budding of one. That is what we have here today from Lince Works as we get a nice little history lesson on how the original game came to be and how they took their lessons to try to make something new to carry things on. New in the terms of Aragami 2 and thus a franchise that they might be carrying on with. Especially as we see this one bridge consoles from PS4 and Xbox One to PS5 and Xbox Series X. Technically the PC jumps too, but that is all up to the individual users instead of a full generational leap. I digress, though…

The short and dirty version of it all was that a group of developers fresh out of school opted to get together to build the basics of Aragami with a team of seven. A massive undertaking for something fresh on the market and to their surprise, the game was taken in by so many and then a success. This, of course, led to the expansion that they put out there for Aragami and the team trying to figure out how to expand the story and world just a bit more to keep the ball rolling for it all. Even if it feels like multiplayer in this franchise does not seem needed, it looks like they are taking the time to make it work and get another success under their belt. It is an interesting watch with a bit of new footage mixed in for those who are not interested in the development side of their video games.

The talented group at Lince Works created a game development studio and birthed a distinguished franchise in the ninja stealth genre. In this first Dev Diary, they dive into the origins of Lince Works, the creation of Aragami, and the evolution up until the development of Aragami 2.

From humble beginnings, the developers recall how the idea of founding the studio came about, what it was like to turn that project into a commercial title, the challenges, and setbacks during the development, and the lessons learned from the experience. In this video, Lince Works explains the conception of the second title of the franchise, Aragami 2, their ambitions, and what they expect to accomplish in the sequel.

Lince Works' first Aragami title was launched in 2016, a Tenchu-style stealth game that was able to revitalize the classic ninja genre by introducing unique gameplay mechanics that felt both challenging and fast for players. With a striking art style inspired by Japanese mythology and culture, Aragami positioned the studio in the global landscape with a well-accomplished ninja stealth game that would take the reigns within the genre. Since launch, Aragami has sold over 600,000 copies worldwide on all platforms — a remarkable accomplishment for their first self-published title considering the size of the studio.

The studio based in Barcelona is now working on developing Aragami 2, with the financial support of GameSeer, Media, and the ICEC. The game is set to release in early 2021 on PlayStation 4, PlayStation 5, Xbox One, Xbox X, and PC.

Did you welcome Aragami with open arms the first time around or did you wait until it was a hit? Do you think that this is a one-off story or something to inspire others out there that have had issues getting funding for their video games? Do you think all video games need multiplayer or are some good without that aspect? Let us all know down in the comments what you are thinking and then feel free to discuss it all. If we have anything to share for Aragami 2, or the franchise in general, we will add it to the site for you. Be sure to keep checking in for all of that and much more on the site.