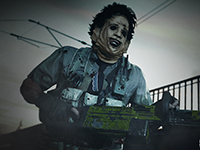 The Halloween event for Call Of Duty: Modern Warfare & Warzone is coming with some big horror icons terrorizing the Call Of Duty multiplayer

If you are a huge fan of the multiplayer for Call Of Duty: Modern Warfare, then you better get ready for a few more frights this Halloween with the announcement of the next big event in the game. It is not odd to see these in any of the multiplayer titles out there and Infinity Ward is aiming to give us a few more frights over the holiday and before the next big Call Of Duty title drops on the world out there. No matter how you feel about it, it will keep rolling out there and with more of the favorite cameos we can expect over the years. This time with a few that do not normally scream first-person shooter to me with Billy the Doll and Leatherface helming the event. That would be the iconic characters from the Saw and Texas Chainsaw Massacre films respectively for those that do not know somehow.

It looks like they will mostly be in Call Of Duty: Warzone by way of character skin we can wear, but the trailer here does make it feel like there might be other aspects we can look at for too. Given that this will be a limited-time event running from October 20th to November 2nd, I would not expect there to be much more than that, but we could be pleasantly surprised. Maybe we will get to use more traps and the meat hammer to take down our opponents. I will not hold my breath on it, but it is a way that the Call Of Duty franchise is going to be celebrating and keeping us engaged during the time. Have a look at the following trailer so you can get a feel for what the update will hold when it downloads tomorrow.

Call Of Duty: Modern Warfare & Warzone — The Haunting Of Verdansk

For the first-ever Halloween experience inside Warzone and Modern Warfare, the SAW and The Texas Chainsaw Massacre universes are part of The Haunting of Verdansk, a limited-time community event set to take place from October 20 to November 3.

This Halloween-themed event will feature the “Trick or Treat” reward system, which contains frights or frighteningly good blueprints and personalization items. Come prepared for infiltrations at day or night, as select modes feature a nighttime variant of Verdansk that includes more than a few Halloween-themed frights. Rather spend the night fighting both the living and the dead? Then prepare for Zombie Royale, an undead twist on Battle Royale where dead Operators use unnatural powers to feast on the living in order to rejoin their ranks!

Modern Warfare Multiplayer also gets into the Halloween spirit with limited-time modes and effects, while the Store is set to feature bundles that bring Leatherface and Billy the Puppet into the fray. In other words, it’s the Devil’s playground across Warzone and Modern Warfare, and no operator is safe from the terrors of All Hallow’s Eve.

Is this the Halloween-themed event you were looking to come to the game or did you want something different? Do you think it could be more than just skins for Call Of Duty or will that be it and then they will fade away when over? Would you want to see the two beings running around with their film weapons or would that be a bad idea with the fast-paced gunplay the game is known for? Let us all know down in the comments and then feel free to discuss it all as you wish. If there is more to share for Call Of Duty in any way, we will share it all on the site. Just be sure to keep checking in for all of that and much more.