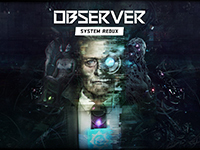 A new video for Observer: System Redux is out there with the famed Rutger Hauer talking about aspects of Observer

Right out of the gate I am going to have to stop you, as we know Rutger Hauer is no longer with us in the physical realm but that does not mean that his legacy does not live on and will through Observer: System Redux. Now that we have that out of the way, we can move on to what we have here for the PS5 and Xbox Series X title that is on its way here for those console launches. The item here is that we have an interview with the man and Bloober Team talking about the game he helped to bring to life and we will see yet again. Sadly, he did pass not long after the first launch of Observer but it looks like that there were some extra behind the scenes things we did not see before and after that release. This is what we are back to see again.

It is interesting to see here how the actor felt about the experience and what was brought to Observer before. That and what his favorite quote was and if there were any truly improvised lines for us to enjoy. It is a fun walk into the past, but the bigger takeaway, and something a bit ironic, is that we are going to be getting more of the performance in the new gameplay aspects coming to Observer: System Redux through a bit of digital reconstruction. We will be getting more stories in this upcoming release and it looks like they did not want to recast the actor but use some of what hit the cutting room floor for a more realistic experience here. Something that feels very Cyberpunk even if other actors out there may not fully approve of all of it in the first place.

We hired an icon but worked with a friend.

Rutger Hauer. The legendary Roy Batty, the symbol of raw, dark cyberpunk. Without his participation in the project, Observer would not have become what it is.

We strongly believe that he would be delighted with the idea of System Redux. Reach further, achieve more, become greater — it was all a part of his character.

He was such a great fit to play Dan Lazarski that we never considered using another actor for System Redux. Instead, we’ve been working with what we had in our archives. After all, we see his game also as a sort of a tribute to him.

Rutger Hauer is missed by so many cyberpunk fans in the world. Today we feel it even stronger. This confirms that indeed the Observer affects the observed reality.

How did all of this sit with you here are you glad to hear how they will be giving us more in Observer: System Redux? Did you expect there to be more improvisation in the game or does it truly show the big differences between the Western acting styles we have here? Should we have expected anything less for this title or is this exactly how you were expecting everything to play out after the announcement? Let us have those thoughts down in the comments and then feel free to discuss it all below. If we have more to share for Observer: System Redux before its launch, we will have it here. Just be sure to keep coming back for all of that and much more.