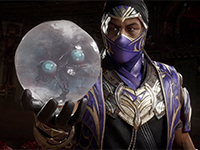 Here we go with some actual gameplay for the upcoming Mortal Kombat 11 Ultimate edition and one of the new characters that will be flowing into the fights again. It is a character that has not been fully seen in the franchise for a while and with only a few cameos in the past. With the Son of Argus fighting his way in, it is nice to finally see what he will be adding into Mortal Kombat 11 when the update and DLC comes. Even if it feels like the Kombat Pack 2 feels like it might be light on the characters and such this time around. At least as of now.

As is to be expected here, Rain uses a whole lot of water powers to kill and maim his opponents in Mortal Kombat. Even if it does not always make sense, it still works well even if it looks like another ninja with an elemental power at hand. Given the character's past and inception it makes sense but it might not be the biggest deviation from the formula here. I am just glad to see that Rain is still Purple in Mortal Kombat to keep that all going just a bit longer. If you know, then you know. If not, have a quick search with those two terms to see what the Easter Egg there is.

Warner Bros. Games and NetherRealm Studios today revealed a new Mortal Kombat 11 Ultimate gameplay trailer showcasing the return of the Edenian demigod, Rain. As the son of the god Argus, Edenia’s divine Protector, Rain wields a magical power allowing him to harness water and lightning, open dimensional rifts to a previously unknown water realm and even liquefy himself to avoid attacks. He is also equipped with a deadly katar to slash and stab opponents as he fights for his place in Edenia's pantheon. Rain joins the roster as a new playable fighter on Nov. 17 as part of Mortal Kombat 11 Ultimate and Kombat Pack 2.

Are you still amped to get Mortal Kombat 11 Ultimate here in a few weeks or is it missing characters you have been hoping for still? Do you feel like Rain feels like the other ninjas in the game or does he feel like he is different enough for this one? Could we see other characters join the Kombat Pack in the future or will it be these three and then maybe something else in the future as we wait for a whole new title? Let us all know down in the comments and then feel free to discuss it all. If there is more for Mortal Kombat 11, we will share it on the site for you. Be sure to keep coming back for all of that and more.