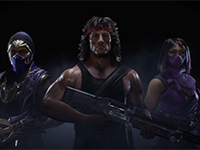 Add another to the growing list of titles that will be getting a free upgrade to the PS5 and Xbox Series X with Mortal Kombat 11 getting that announcement. Although, that may not be the biggest of announcements here for the game as it looks like we are also getting a new Kombat Pack for all of the versions of the game too. That means that we are going to see some new characters join the roster of Mortal Kombat 11. Some of which have been characters that many have been hoping for with Rain, Mileena, and John Rambo joining the fight. An interesting set of characters added in here for us all to play with.

All of this is coming packaged in a new bundle called the Mortal Kombat 11 Ultimate edition for those that have not been buying things piecemeal since the start. This bundle will bring the core game, the Aftermath expansion, and the two Kombat Packs so you can have the roster of 37 fighters too. Also, the usual upgrades we all see in these editions that will make full use of the hardware we will soon be playing with. All of which will be available on November 17th for those looking to buy it all or just do the upgrade to it all. even if this new pack seems a bit pricy for just these three characters.

Have you been keeping up on all of the Mortal Kombat 11 releases or will you be getting this final bundle when it hits the next-gen systems? Do you think we will see more characters in the Kombat Pack or will it only be these three we see now? Will this get the game back into the spotlight again or will it stick to the eSports and hardcore fans after all of this? Let us all know down in the comments what you are thinking about this and then feel free to discuss it all. When we see more for Mortal Kombat 11 in any form, we will share it all here on the site. Be sure to keep checking back in for all of that and more.