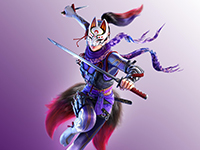 The characters keep coming out for Tekken 7 as we have Season 4 coming soon and with it brings another old character back into the fight. It has been a good bit since we heard anything out of Bandai Namco for this one and it looks like the wait might have been worth it. I say that it looks like Kunimitsu is coming back in with a new look and ready to destroy everyone. Another character that has not been around since Tekken 2 and now will be back in to hop onto the PS4, Xbox One, and PC. There is not much more of Fall to look at so I am going to guess it will be sometime in the next month or two for those looking for this DLC.

In addition to the new character, Tekken 7 will be getting a few other things added in and tweaked a bit. There is not much in the way of deeper detail for that as of yet, but we can look for another stage to fight in and more characters and other stages to flow in too. You can see Kunimitsu in action just below in the fun announcement trailer we have for the character as well as a few other fighters you might love already. Then we just wait for the next update and the release of all of this to Tekken 7 rather soon. That or by the end of the year here.

As we enter a new season of Tekken 7 esports competition, additional gameplay improvements and new content are coming for the acclaimed fighting game title in its Season 4 update.

Kicking-off the updates are the return of Kunimitsu and a brand new Vermilion Gates stage, both will be available in fall 2020. Kunimitsu’s last official appearance in a Tekken game was in Tekken 2, her return will surely excite fans looking to wield her Manji Ninjutsu skills in battle.

Along with Kunimitsu and the Vermilion Gates updates, there will be an array of free updates coming to Tekken 7, including:

Check out Kunimitsu in action in the Vermilion Gates stage!

Have you been waiting for this character to join in the fun for Tekken 7 or were you hoping for a different one here? How many more beyond this season do you think we will see before we get a full new game to experience? Who do you think will be the next character we are going to be waiting for here? Let us all know down in the comments and then feel free to discuss it all. If there is more to share for Tekken 7, you know we will do what we can to get it up on the site for you. Just keep your eyes on the site to see all of that as it comes.