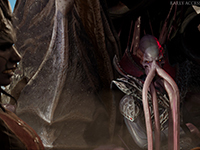 Just in case you needed one more reminder that Baldur’s Gate 3 is heading out there for an Early Access on the various PC platforms out there, we have just that for you here. As you are reading this, you could be downloading or playing the game as it is out there with the 25 hours of content and all of the other fun bells and whistles that have been completed up to now by the studio. There is still a lot more to go for Baldur’s Gate 3, but this will at least hold us all over until the game goes fully gold and all of the other bugs are worked out for it. Hopefully, that means we will see more classes and races added in for us to play along the way with other new missions and stories to be had. We will not know for a while, but that does not change the fact that we can get in on it all now.

To go along with this reminder, we have one more trailer for Baldur’s Gate 3 to give us a taste of the gameplay as it stands so far and a little more of the story we will experience. I know I am hoping that the story will expand or change from now until the final version so we all have more reason to keep playing or to play again. This is one of the big issues I have with games going into Early Access that are more focused on story than any specific gameplay mechanics. It is more like we might be experiencing Baldur’s Gate 3 in episodes now instead of all at once even if we have so much to play right now. I guess we will find out as development continues.

Larian Studios is excited to announce that its long-awaited RPG Baldur’s Gate 3 has today released into early access for PC and Mac on Steam and GOG.com, as well as Google Stadia. Players all over the world can now enjoy the first act of the game, which spans roughly 25 hours of content, 46,000 lines of English dialogue, 600 NPCs, and 146 spells and actions. The game’s extensive character creation system lets players pick from 16 races and subraces as well as six different classes, each with their own subclasses.

Today’s release into early access marks the beginning of a long journey toward full launch. Working directly with the community, the team will continuously iterate and improve upon the game, adding new content along the way. RPGs this large, with so many permutations, thrive from feedback as new features and fixes are incrementally added to the game. Early access gives players a chance to participate in the development and gives the team an opportunity to explore different game ideas with a live community.

Are you already playing Baldur’s Gate 3 and took a small break to come read this or will you be heading in here soon? Do you think we will get something new for the story after the Early Access or will it be about the same and we will only have a few smaller changes afterward? Could we see more classes and races over time or will it be a set number until we get the next big expansion or installment into the franchise? Let us have those answers down below in the comments and then feel free to discuss it all. If we have more to share for Baldur’s Gate 3 we will share it all here. Please keep coming back here to see and hear it all.