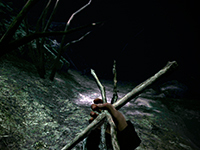 It looks like Blair Witch is going into VR with the announcement for Blair Witch: Oculus Quest Edition for this Halloween

If you have not been able to get enough Blair Witch, we have a new platform for you to head out and give it a try on. Well, more the ability to go even more virtual with it all with the announcement of the Oculus Quest Edition of the game that will be out there on October 29th. We are going into the virtual reality landscape of it all for Blair Witch now and it looks like there will be a little more added in terms of content too. Just what we need for Halloween here for those looking to have a reason to crap their pants a bit more during the horror season.

Even though we will see Blair Witch in VR now, it does look like it is getting a bit of a downgrade in terms of visuals here. Something that is interesting to see when it has made the shift. We are getting new interactions with Bullet in the game that will also include the ability to pet the dog. You know, because that is what everyone wants instead of making things look and flow just as well as before. I guess we will know more in a few short weeks when we don the helmets or goggles to get back into the world of the Blair Witch. Now we just wait to see it if will jump to the other options out there too.

Designed with the new Oculus Quest 2 in mind, Blair Witch: Oculus Quest Edition supports higher resolution and better quality textures made possible by the power of this new hardware.

Did you think we needed to play Blair Witch in VR or was it a title that should have stayed to the normal gaming view? Are you curious as to why the visuals have been downgraded or is it just because of the hardware that it was needed here? Will the addition of the new features be enough to get you back in or will it be a pass for you here? Let us all know down in the comments and then feel free to discuss it all. If there is more for Blair Witch in any way, we will share it all here. Just be sure to keep checking in here for all of that and more.