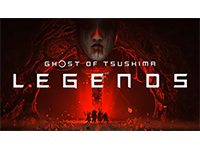 We knew it was coming and now we know when we will see the co-op multiplayer added into Ghost Of Tsushima over on the PS4. Not only the co-op, but a lot of other cool things that Sucker Punch wanted into the game and is offering up for free. For most out there, though, the multiplayer added into the game is going to be the bigger thing to look at. Not that Ghost Of Tsushima is not a fun experience to have on our own, but for some reason we all like playing our video games with others. What a weird and novel idea to have here. Something we will get to see come to light on October 16th. Just over a week away from now.

In addition to the co-op gameplay for Ghost Of Tsushima, there will be a number of other cosmetic and new options for the core game. Things like a New Game+ mode and other various dyes to place on our character will be in there. There will also be some new merchant and character options and talk of some new trophies in the mix too. I have a feeling those will be geared more for the co-op aspect of Ghost Of Tsushima and not the core game, but we could be surprised. Even if most of the trophy hunters out there hate multiplayer only trophies in their PlayStation games now. Either way, have a look at everything that will be coming next week.

Version 1.1 is a free update for all Ghost Of Tsushima players. This update brings the launch of Ghost Of Tsushima: Legends, a brand new co-op multiplayer mode inspired by Japanese mythology, as well as exciting new updates and New Game+ for the single-player campaign.

Is this the big update you have been waiting for when it comes to Ghost Of Tsushima or will you be looking for something that adds more story to the game? Do you think the multiplayer will keep us all engaged for some time or will it only bring us back in for a short bit here? How do you feel about multiplayer trophies and should they only be relegated to showing you played it and not a hard grind where you need to rely on other players? Let us all know down in the comments and then feel free to discuss it all. If there is more for Ghost Of Tsushima, you know we will have it all here.