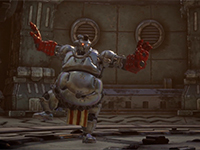 New enemies have been shown off for F.I.S.T: Forged In Shadow Torch that will add a bit more of a challenge to the overall whip of F.I.S.T

It has been a wait, but here we go with more to look at for F.I.S.T: Forged In Shadow Torch. This would be that Metroidvania title we have seen in the past with a rabbit attached to a giant mechanical arm that is coming from TiGames. It caught my eye way back when it was first shown off and now we are back to look at a bit more for the F.I.S.T can do and the enemies we will be doing that stuff to. It is also a nice bit of gameplay for the game to get us all hyped up for when it comes to the PS4 and PC. Fingers are crossed that it will not be that far out there for us all.

As you can see below, we get a nice tour on how in F.I.S.T we will have to earn upgrades and master them to get around not only the game's world but also to find more hidden things. The drill can be turned into a few different things as can the normal fist. Also, it looks like each of the enemies could be treated like a mini-boss of sorts as they do have a few more motions and attacks than normal enemies would have in a game like this. Although, I have a feeling that it is going to be the bosses of F.I.S.T that are going to make it the most entertaining with not only their actions but also their looks.

Six years ago, the Machine Legion invaded and colonized Torch City, which was originally inhabited by animals. Rayton, the former soldier in the resistance war, has been living in seclusion since then. After his friend is forcibly arrested, Rayton reclaims his mechanical fist and steps into his journey fighting back. And he never expects that he has been involved in a bigger scheme between the mafia, the rebellion, and the legion.

Explore a Metroidvania game world with a dozen of areas with distinguished vision themes and level designs. Earn the rewards by conquering combat challenges, puzzles, and platforming in countless chambers, tunnels, and shortcuts.

Master the Fist, Drill, and Whip, and switch your advantages between long hits, high damage, and wide range depending on the situation of the battlefield, taking every enemy standing in front of you down.

Dozens of enemies wielding their unique weapons challenge you with exquisite cooperation tactics, and various bosses with totally different combat patterns provide you a never-repeated experience.

The combination of dieselpunk aesthetics and oriental-style architecture constructs the core visual style of Torch City, exposing the world with the intense conflict between the furry animals and the mechanical army from their appearance to the nature.

Powered by Unreal Engine 4 with physically-based rendering and extremely detailed textures, it presents a gorgeous 3D visual performance and pushing the genre to a whole new level.

Do you like how F.I.S.T looks to be shaping up here or is it too early to tell? Could all of the lesser enemies have that feel I mentioned or will it only look that way and still have two distinct patterns? Do you think the boss we have here will be engaging or will it be the normal thing we have seen time and time again? Let us have those thoughts down in the comments and then feel free to discuss it all. If there is more for F.I.S.T: Forged In Shadow Torch, we will have it all here. Just keep swinging back in for all of that and more.