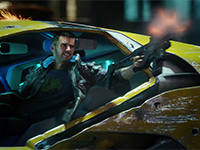 There has been a whole lot of news about Cyberpunk 2077 as of late and so much to see for the game. Some of it amazing and some of it not so good in terms of CD Projekt RED. We will not get into all of that side of it as we have more promotional materials to look at for Cyberpunk 2077 and it will catch the eyes of many. Not just because of the game here but also because it does feature more of Keanu Reeves. Just what the world needs more of here to keep us going and not just to help push more game sales. This is not one that really needs a whole lot of a media push to get us to pre-order after all.

Sadly, there is not much more to go on for Cyberpunk 2077 here as it is all a big commercial to let us know that the game is still coming and you can pre-order it now. There are a few more quick shots that are hard to tell if they are from the game or made just for this. My guess is that they are a mix of both to get us all properly hyped for Cyberpunk 2077, but at least we have America's boyfriend telling you to get ready while to play and buy. Even of the development team is being pushed to make sure they do not miss the November 19th release date. Damn it. I tried to not mention all of that.

Cyberpunk 2077, an open-world, action-adventure story from CD Projekt RED, is coming to Xbox One, PlayStation 4, and PC on November 19th, 2020, with the version for Google Stadia set to launch the same year. The game will also be playable on Xbox Series X and PlayStation 5 consoles when available.

Have you picked up your copy of Cyberpunk 2077 yet or will you be waiting until it launches to buy the game? Do these kinds of ads get you to pick up video games or is it a weird waste of time and money for a title like this one? How much of the actual game is in here or is it all bits made to help promote the game? Let us all know down in the comments what you are thinking and then feel free to discuss it all. If there is more for Cyberpunk 2077, we will obviously have it up on the site for you. Just keep coming back here for all of that and much more.