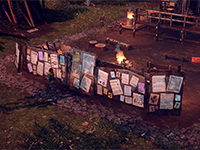 The next update for Endzone: A World Apart is here to bring us some new forums and options to better survive the world of Endzone

Any society that is going to be able to survive in the harshness of Endzone: A World Apart is going to need some solid leadership. Well, any society that has humans involved as the species is not always that great at self-governing. The world has shown us that. That is why it is great to see that the next big update for Endzone is here to not only add in more to do but also that Leadership feature some have been waiting for in the game. It does add a few more issues to worry about in the game but adds a nice little bit to make it feel closer to how things might shake out in a world like this. That is if any of our media and stories have anything to say about it when it comes to situations as we see in the game here.

This new update will add in some features into Endzone that will now allow for the populations in your cities built to make requests to ask you for your help in managing the wellbeing of the city. Things like how water and food should be rationed out and up to birth control to keep the population down to help manage that too. This may seem like some dark things to think about in a video game here, but in the universe of Endzone, it is all something that needs to be thought about. Too many people can lead to a lack of resources and then everyone dies. You just need to try to manage it without being too much of a dictator to survive. That or go full dictator and see if you can get the population to overthrow you and set you adrift in the wilds. That is not a listed feature, but it would be awesome to see implemented for those gamers looking to have the thrill of going down that dark path.

The apocalypse isn’t quite over, as Assemble Entertainment’s award-winning Endzone: A World Apart has received a new update on PC. The update introduces “leadership” features to the post-apocalyptic city-builder that make Settler interactions even more immersive and rewarding.

Players can now set up a Forum community building, allowing decrees to be enacted such as food and water rationing and even birth control, which keeps populations manageable. The decrees can affect Settlers negatively or positively, meaning it’s up to the player to make the right choices for the proper Settlers. Additionally, the Forum allows Settlers to post tasks to a bulletin board that can then be selected by the player to earn rewards. Decrees are also now available in the Technology Tree.

The update brings with a wide breadth of highly-requested features and content, such as new Expeditions, Scenarios, seeds for gardening, and additional decorative items to place around settlements to boost morale and spruce up the living quarters! Players can also expect an updated tutorial, enhanced UI, and various bug fixes.

Is this an update you have been waiting for in Endzone or is it another thing that will get shuffled around for you? Do you think that you will try to go for the greater good or will you always become that horrible overlord? Do you think that there will be something n there to allow your population to fight back against you or will it just be watching them all slowly die after being worked to death? Let us have all of those thoughts down in the comments and then feel free to discuss it all. If there is more for Endzone: A World Apart, it will be up on the site for you. Just be sure to keep checking in for all of that and much more.