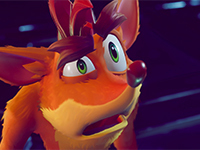 It is hard to believe that October 2nd is almost here and we will soon be seeing Crash Bandicoot: It’s About Time out there after so much time has passed. Both since it was announced and since we had a full entry into the franchise that was not just a remaster of sorts. So far it has looked like Toys For Bob has been handling it all with great care, and now we have another trailer that shows off a bit more of that. Not that we would think we would be seeing Crash Bandicoot back out there in a lackluster title, but it is always a concern when dealing with such a beloved franchise as this one is. Especially when they are bringing back so many old things and bringing in some new stuff as they should.

What we have here is the launch trailer for this Crash Bandicoot that is a bit out there before the final launch date. It always seems weird to get them this far in advance, but I will take it. More so when we get to see that we have more gameplay mixed in and more to look at for the different ways that the game can be played. I am talking about those level alterations and other cosmetic things we have seen and heard about since it first dropped on us. I am a bit curious if there will be a way to get some of the camera angle changes as we see here when we play It’s About Time or if that will be stuck to only the marketing of it all. It would be a little weird to play as Crash Bandicoot from those perspectives but could lead to a whole lot of fun when capturing video for streams out there.

How long have you been waiting for a new Crash Bandicoot title beyond from when we had this announcement? Do you like the new level changes we can turn on in the game or will you pass those by altogether? Would you want to be able to change camera angles on the fly as the video here or will you stick to what is forced by the developers to make the game run smoother? We want all of those answers and feedback down in the comments and then feel free to discuss it all. If there is more to share for Crash Bandicoot: It’s About Time, we will have it all here on the site. Be sure to keep checking in for all of that and much more.