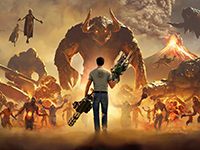 There is still a little bit of time until Serious Sam 4 head out there for us and some of us need something to help pass the time. Sure, there are multiple different things we could partake in to do this, but some out there only want to focus on their one title right now. For those out there in that pool, it looks like Croteam has us covered with a developer diary for the game and also a bit of an explanation why it took so long for everyone to get a new Serious Sam title. That is on top of the team wanting to work on different projects along the way too. It happens and is part of the reason we are only seeing this sequel here on September 24th now.

There is a lot of back and forth with a few minor things to take in for Serious Sam here, but there is one bigger focus that has caught my eye. It looks like the team has taken some lessons from one of those other titles they put out there, The Talos Principle, and brought it on over here. That being the way that they are handling the storytelling in the game. There is going to be a whole lot of action, but this is going to be the one that gives us a lot of the lore in the Serious Sam world for many to hold on to. That and it looks like some of the puzzle design from the other title mention had some of the scrapped levels from this upcoming game mixed in. I guess we can take that as a bit of a heads up on how that will flow in the final build here.

Serious Sam returns with a high-powered prequel to legendary series that scales up chaos to unprecedented levels. The classic Serious Sam formula is revamped by putting an unstoppable arsenal up against an unimaginable number of enemies that requires players to circle-strafe and backpedal-blast their way out of impossible situations.

Have you been waiting with too much excitement for this Serious Sam title or will you see how it all plays out before giving it a go? Have you been dying to get more story in your game here or is that something you will ignore just for the explosions? Is it interesting to know that some of the scrapped levels made it into their other title and do you think it will go the same way to this one? Give us all of those thoughts down in the comments and then feel free to discuss it all. If we have more for Serious Sam 4, you know we will have it all up here for you. All you need to do is keep coming back for all of that and much more.