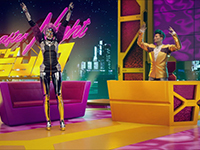 Some of us have been able to wait patiently and others not so much, but we are back with the next Night City Wire for Cyberpunk 2077 to look at more that is coming to the game on November 19th. Thankfully, this is not another release delay and more on a few more aspects of the game that CD Projekt RED have been placing in there. One of the big highlights being that of Night Coty in the world of Cyberpunk 2077 along with a few of the different games that are out there. There is a whole lot more for various other aspects of the game, but this is the bigger focal point of it all in this new video. Get ready for a huge information dump here.

As mentioned, Night City is going to play a big role in Cyberpunk 2077 just as the setting of all of their other games out there. It is all based on a distorted view of the California coast to fit the setting as well as a few other structure elements mixed in. Like the themes of building and rebuilding on top of structures that are already there and the very distinct economic class structure that is built into all that as well. All of which was easy to spot from the start of Cyberpunk 2077's development, but now that it is highlighted more, we can see a few extra locations that were used for inspiration. Things I do not think we will see directly in any form as the whole city is set up to work like a real-world one and the team could not copy all of that and still get the game out. It is just nice to know that we can layout street names for directions in the game when trying to help others.

The other big thing we get a highlight for here is the various gangs we will encounter in this cyberpunk world. There are quite a few and all of them have their own very distinct look and motivations added in. None of them are truly fleshed out in the video here, but you can have a look and mostly understand what they are about. Like the Moxies and their roots in sex work or the Animals and their roots in being thugs for hire. It is all interesting to see. Also worth noting, we will not be able to join any of them directly in Cyberpunk 2077 but we will be given missions from them. We will have our own society we will be part of, but nothing as involved as these gangs. We will only need to sit pretty with the note that we can join in on their fun but not them directly.

Cyberpunk 2077, an open-world, action-adventure story from CD Projekt RED, is coming to Xbox One, PlayStation 4, and PC on November 19th, 2020, with the version for Google Stadia set to launch the same year. The game will also be playable on Xbox Series X and PlayStation 5 consoles when available.

Do you like the direction we are seeing for Night City in this cyberpunk world or does it not fit with how your thought of it in the tabletop game? Would you want to join a gang here or do you like being able to "play nice" with all of them if you so choose? Do you think we will have different Street Cred for each as we go through the game or will it truly be based on a case to case basis? Let us have all of those thoughts and feelings down in the comments and then feel free to discuss it all. If we have more Cyberpunk 2077, you know we will have it all here. Just be sure to keep swinging in for all of that and much more.