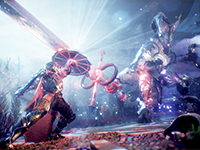 There have been some great teases and shows for Godfall over the course of time since its announcement and the time is coming to a close until it should be hitting the PS5 and PC. We all need and want more for the game and it looks as if Counterplay Games is giving us one more taste for it all. Some of it in cutscenes for Godfall but also with a nice new slice of gameplay all about the combat in the game. Something listed as needing us to dominate and exploit in the game's world if we want to make it all the way through it all. Kind of the normal thing to expect here in video games, but at least we get something new to look at.

More or less, the combat for Godfall looks to flow about the same as many other slashers out there, even if it looks like some swings and attacks can be a bit on the slow side. This could be just how the video is clipped here but it could also be a good sign of how the combat might work. Swing, dodge, swing, repeat. We will not know much more about the specifics of it all until we get a nice and bigger breakdown for it all, but it gives us some nice visuals to take in and experience. Godfall is starting to feel like more of Souls style of game instead of the action-RPG it is listed as. I kind of hope that is all based on how things were shown here instead of how the final product will be.

Exploit weak points, slay with friends, and dominate the battlefield in Godfall on PlayStation 5 and PC via the Epic Games Store this Holiday 2020.

Aperion is on the precipice of ruin. You are the last of the Valorian knights, god-like warriors able to equip Valorplates, legendary armor sets that transform wielders into unstoppable masters of melee combat. Tear through foes as you climb through the elemental realms and challenge the mad god, Macros who awaits you at the top. Ascend in Godfall, the first-of-its-kind, looter-slasher, melee action-RPG.

How are you feeling about Godfall at this point and does it all feel like it could be more of a Souls style of game than we knew? Do you think this is all gameplay we are seeing but framed as a few different scenes instead? Will it be an endless cycle of swing, dodge, swing in the final build or will each character feel vastly different than we see here? Let us all know down in the comments and then feel free to discuss it all. If there is more for Godfall and the combat, or anything else, we will share it all here for you. Just be sure to keep checking in for all of that and much more as we head closer to launch.