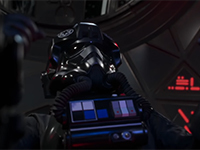 A new cinematic trailer for Star Wars: Squadrons give us a feel for how these dogfights might feel in this slice of Star Wars

The war is still on in Star Wars: Squadrons and we have a little more proof of it all with the latest video we have today. A nice new look at how some of the dogfights will flow in our minds and not truly in the gameplay of it all. Not that Motive Studios is not going to be making it as fun as possible, but there will be a lot missed in the mix of it all given how games usually go. That all said, we do get a new slice of the Star Wars fun here with how things can feel in it all. Interestingly, all from the point of view of one of the Imperials instead of the Rebels as is the usual case of it all.

If you have not gathered it all as of yet, this is not gameplay for Star Wars: Squadrons but something that was made in collaboration with Lucasfilm to help highlight the game a bit more. It is interesting to see that they transition from space to a planet chase in the scenes with weapons being used in various different ways that are not traditional in the Star Wars setting. I do hope that it comes across in the final game, as it would be fun to see how it all goes in gameplay form. I will not hold you back from watching it anymore, so have at it.

The Empire’s retreat after a surprise attack marks yet another stumble in the wake of the second Death Star’s destruction. But for one member of Titan Squadron, the battle is far from over. Squadron Leader Varko Grey finds himself as the last TIE pilot on the battlefield, hunted relentlessly by a renegade New Republic X-wing in this standalone Star Wars: Squadrons story.

Made in collaboration by Motive Studios, Lucasfilm, and ILM, "Hunted" is set before the events of Star Wars: Squadrons, introducing you to one of the ace pilots who you'll be fighting alongside in the story to unfold.

Master the art of starfighter combat in the authentic piloting experience Star Wars: Squadrons, available October 2, 2020 on PlayStation 4, Xbox One, PC on EA.com, Steam, and Epic Games Store, and playable in Virtual Reality (VR) on PlayStation 4 and PC with cross-play support.

Does this new video for Star Wars: Squadrons get you all excited or does it just get a pass given that it is not actual gameplay? Could we get some gameplay that goes from space to planet as we see here in the video or is that just a dream for now? Will we get to use the weapons as we see here or will that also just be a dream? Let us all know down in the comments and then feel free to discuss it all. If there is more for Star Wars: Squadrons, we will share it all here. Just be sure to keep checking in for all of that and more.