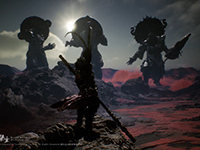 After Black Myth: Wukong took the internet by storm, we all were left with a little bit to ponder on and speculate from based on what we had. It was a nice and beefy thirteen minutes of visuals and gameplay to take in but there was still a whole lot to be left to the imagination. It is kind of the way things go in the industry and we cannot always get an announcement to launch as we all like it. Thankfully, it looks like a bit more for Black Myth: Wukong is out there for us to take in and learn about for the game. Not in the way of new gameplay or visuals, but in the way of a few more details we might have missed out on before or just know now from all of this.

It is interesting to find out that what we have here for Black Myth: Wukong already is a slice from two years of work and a team of thirty working on it. That does mean that we will have a few more years to wait until we get to see it in our homes as Game Science thinks it will be at least three more years. All to give us a nice fifteen hours of gameplay with various ways to go about taking down the hundreds of different enemies out there. All from the point of view of three different Wukong versions we had a small look at when the news first hit us all. It is interesting to know and see, but I think those are the bigger point that we have out of the long list just below.

Are you still excited for Black Myth: Wukong after all of this or will the wait lessen it for now? Do you think we will actually see a trilogy in the end or will that all be based on the performance of the final products out there? Do you like the darker look at the story that the team is going for here or would you rather them go a different way with it all? Let us have those thoughts down in the comments and then discuss away. When we have something new to share for Black Myth: Wukong, you know we will have it all here. Just keep your eyes open for all of that and much more.