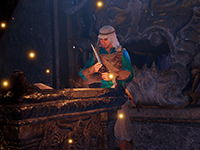 The rumors look like they were true and we are officially getting a Prince Of Persia: The Sands Of Time Remake for the PS4, PS5, Xbox One, Xbox Series X, and PC on January 21st. Sure, it was being talked about that Ubisoft was working on a remaster instead, but it looks like it will be a full remake of the game instead. Something that could be good given how long-ago Prince Of Persia: The Sands Of Time came out but a hefty task to undertake to get it right. At least when you compare it to all of the other remakes we have been getting as of late. It is good we have some alpha game footage to look at and see how the team is going with it.

Sadly, at least for me, it looks like this version of Prince Of Persia is not going to be the same level of remake we have seen from others. It is much better visually than we saw back in 2003, but it does not feel like it is where it could be with the modern and next-gen systems it will be on. It lands more on the remaster level even though they are taking time to motion capture more and revamp a few of the gameplay systems to better fit. This is just an announcement for this version of Prince Of Persia and there is still some time for the models and textures to be upgraded, but I have a feeling this is what we will see. If the gameplay is just as solid as the first time around, I will take it though.

Prince Of Persia: The Sands Of Time Remake — Official Reveal

The Prince is back! Remade for the first time by Ubisoft, relive this legendary tale, or discover it new for the first time. Embark on a journey as the Prince to save your kingdom from the treacherous Vizier, in this timeless classic.

Prince Of Persia: The Sands Of Time Remake will be available on 21st January 2021 on PlayStation 5, PlayStation 4, Xbox Series X, Xbox One, Uplay, Uplay+, and Epic Games.

Pre-order now and get access to the Back to the Origins Set which includes the Original Prince skin, Original Weapons set and Classic Filter to experience the game as back in time!

Have you been hoping to get more Prince Of Persia and will this sate that hunger? Do you agree that the visuals do not feel like a full remake or is it too soon to make that call? How do you think they have changed the combat and other systems to better fit the current standards of gaming? Let us have all of those thoughts and feelings down in the comments and then feel free to discuss it all. If there is more for the Prince Of Persia: The Sands Of Time Remake, we will have it all here for you. All you have to do is keep coming back to check it all out.