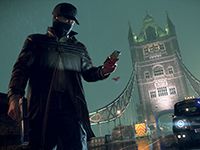 New information for Watch Dogs: Legion just dropped with new looks at the game and one of the Watch Dogs protagonists coming back into the mix

The latest Ubisoft Forward has gone down and we had a whole lot to take in for Watch Dogs: Legion this time around. With just over a month until October 29th, there is still a lot that they can show off and get us excited about. Something that they dug into a bit more when it comes to the recruitment process in Watch Dogs: Legion and a few more of the characters we can find out in the mix. Given that we should be able to recruit everyone we see, that is one huge list to go through but I guess this is why we get a few more styles of characters and not really fully named ones here. Even though they do have names.

So, besides have a few more looks at characters we can potentially bring on, it looks like we have a showing of legendary recruits and other flaws some of them might have. For instance, we have a robotic beekeeper that falls in the legendary side of things where they have devices that prevent extra damage and also have the ability to control swarms of robotic bees to do their bidding. A stark contrast to the general "hitman" types we have seen before or in general. Although we do get to see how we will new to pay attention to the flaws of characters in Watch Dogs: Legion with the latter as we have a hitman that has hiccups here. Something that can ruin a perfect stealth game if it fires off.

Learn more on how to recruit in the world of Watch Dogs: Legion. From a getaway driver to a street artist, every Londoner has a unique backstory, a special skill set, and a distinctive personality. Literally anyone you meet in the streets can join your team so it's up to you to make it the way you like.

All of that is nice and good, but the bigger news out of all of this has to come in the way of something coming post-launch for Watch Dogs: Legion. A taste of the first DLC that will be bringing the hacker that kicked it all off back in one more time. Aiden Pearce is coming back in the first DLC that will bring in his own story missions and then allow for us to add him to the growing rosters of recruits we will have. It also looks like we will be able to play out the game as him after he joins up as there does seem to be a seen where his actions and locations mirror that of a different recruit. Now we just get to wonder if the crew from Watch Dogs 2 will be making the trip across the pond.

He's back! Older but not necessarily wiser. Aiden Pearce will be a fully-playable character as part of Watch Dogs: Legion post-launch plans. A whole new chapter dedicated to the main character of Watch Dogs will be available in the Season Pass. Stay tuned and welcome to the Resistance!

Will you be trying to recruit everyone out there in Watch Dogs: Legion or will you only go for the high-value recruits? What other legendary recruits do you think will be out there and will they all be as random as the beekeeper we see here? Do you like the fact that Aiden is coming back or do you think we should have the whole hacker team from the other title here instead? Let us all know down in the comments what you are thinking and then feel free to discuss it all as you wish. When there is more for Watch Dogs: Legion, we will have it all here for you. Just be sure to keep checking in for all of that and much more.