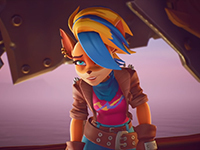 We have new gameplay for Crash Bandicoot: It’s About Time to take in and this one adds some new twists to it all. Not that we did not already know that we were going to get some solid twists here for the game, but in this one, we get to see how Toys For Bob is changing things up for a different character and how some of the gameplay tweaks will work in the game. Tawna is back here for Crash Bandicoot 4 and we get to see the different play modes for levels is the short version of all of that. All in a nice long package of gameplay to experience before it launches on October 2nd.

As mentioned, we get to see how Tawna will be back in Crash Bandicoot 4 and it looks like the character has a new look. This is because this Tawna is from a different dimension and not the one we have experienced from before. All with the fun hook shot and traversal gameplay we could have hoped for in the game. Something we will need to master a bit more as the new modifications to levels looks like they can add in a whole lot more than just a color pallet. Like one where the level is now underwater and all the muscle memory from before will be thrown out the window if you want to make it through. That could add a whole lot of replay value to Crash Bandicoot: It’s About Time most definitely.

Let's play Crash Bandicoot: It’s About Time! Developers from Toys For Bob join us for an exciting first look at Tawna gameplay in the upcoming sequel. The redesigned interdimensional Bandicoot comes packed with a host of new tricks and unique spin on platforming and combat. Play as Tawna when Crash 4 hits PS4 and Xbox One October 2.

Get a taste of the time-bending madness before the game launches on October 2, 2020.

What do you think about the new look for Tawna in Crash Bandicoot 4 and does it flow well for you? Do you like the different costume options we will have in the game or do you still need to see more before making a final decision? How many times do you see yourself playing the levels in the game or will these mods make you always keep coming back for more? Let us all know down in the comments and then feel free to discuss it all. If we have more to share for Crash Bandicoot: It’s About Time, you know we will have it all here for you. Just be sure to keep checking in for all of that and much more as we head toward the launch.