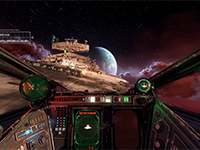 New gameplay for Star Wars: Squadrons is out there with a new look at one of the missions that will expand on the Star Wars saga to come

We wanted more gameplay for Star Wars: Squadrons and now we have it with our first look at how some of the single-player is going to flow in the game. It should not be a huge mystery that it is going to flow about as much as expected here as Motive Studios is making a space dogfighting game set in the Star Wars universe. The bigger sell is going to be the fact that we will get to play on both sides of the conflict to see who really is the bad guy out there or why some of the choices were made along the way. All in that VR setting too if we so chose. So buckle in, as we have some of the first gameplay we are going to have here before October 2nd rolls on up here. It is not that far away when you look at it.

As I mentioned, it looks and flows about as one would expect in a Star Wars game where we get to fly the ships. We are set out to fly around, take out enemy ships, and destroy targets along the way. The mission we have here also mentioned that we are here to reclaim one of the imperial spies we have out there, but it looks more like we are going to be clearing the way for the real dropships. It still looks cool and I am still hooked on the fact that we will be able to play the whole thing in a VR space. Even if they are not the usual iconic ships we expect from the Star Wars setting, it will still be an experience. have a look and see how this gameplay is going to go.

Though shattered after the Battle of Endor, the Galactic Empire closes in on the Bormea Sector, determined to crush the recently-formed New Republic. The Republic’s classified Project Starhawk represents a tipping point in the Galactic Civil War, and ace pilots on each side will be instrumental in its outcome. Get a first look at an early Imperial mission in the single-player story of Star Wars: Squadrons, where you must fly behind enemy lines to extract an allied spy with vital intelligence on the project.

Buckle up and experience this action-packed and authentic Star Wars story – following the events in Return of the Jedi – from both sides of the conflict in the cockpits of iconic starfighters. Star Wars: Squadrons is available October 2, 2020 on PlayStation 4, Xbox One, PC on EA.com, Steam, and Epic Games Store, and playable in Virtual Reality (VR) on PlayStation 4 and PC with cross-play support.

The New Republic fights for freedom. The Empire demands order. Do you have what it takes to join the galaxy’s finest?

Did you expect to see something else here for the gameplay or did it all in line with what should be expected from a Star Wars title like this? Do you think we will see more of a 'human' side to the conflict in the story or will we care after all of this time? what ships are you hoping to get to pilot in the game or will it be the lesser-known ships from the franchise that we get? Let us have all of those answers and more down in the comments and then feel free to discuss it all. If there is more for Star Wars: Squadrons, we will share it all on the site. Be sure to keep checking in for all of that and much more.