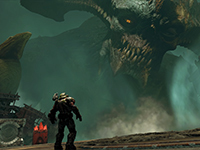 Here we go with the release date for the upcoming DLC for DOOM Eternal called The Ancient Gods. Well, at least the first part of it all as it looks like id Software is breaking it up into parts here instead of one big expansion mixed in. I am sure this is to get it all out to us as quickly as possible while DOOM is still on our minds. No matter the case, we will see this all drop on us October 20th for those that have the Year One Pass or Digital Deluxe editions of the game. That or you can pick it up on your own if you so choose. Even if you do not own the base version of the game. So I guess this is more of a standalone than an expansion to the game here.

To go along with this, we have some actual gameplay here of the DOOM Slayer doing the slaying thing in the new areas of the world. It looks like it will add a whole lot of fun and destruction into the game here, but I am not a fan of the way the audio sounds here. Specifically what sounds like the antagonist of The Ancient Gods here as it is completely impossible to understand. Maybe this will not be in the final version here, but the voice modulation to make it sound underwater is going to make this story dumb to follow while doing all the ripping and tearing we will normally do in a DOOM game. Have a look and see what I am talking about here.

The first of a two-part story expansion for DOOM Eternal: The Ancient Gods, Part One casts players once again as the DOOM Slayer to confront an ancient evil awoken from an imbalance in the heavens. Ripping and tearing through never-before-seen locations in the DOOM universe, players will face off against fierce new demons and discover a new chapter in the DOOM Slayer’s story.

And don’t forget, DOOM Eternal is coming to Xbox Series X and PlayStation 5 as a free upgrade for current-gen owners when those versions are available. id Software is also working hard to ensure DOOM Eternal will support backwards compatibility when the new consoles launch.

Will you be joining back in on the fun of DOOM Eternal here with this DLC or are you still on the fence about it? Do you think that the voice modulation here is impossible to understand or is it just my ears here? Will this actually sell well without the base game or will this force more gamers to pick it up to have the experience? Let us have all of those thoughts and feelings down in the comments and then feel free to discuss it all. If there is more for DOOM Eternal, we will have it here for you. Be sure to keep checking in here for all of that and more.