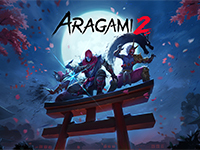 I did not think it was coming and then Lince Works slipped it out there with the announcement for Aragami 2. The follow up to the stealth title we had a while back on the PS4 and PC. Now we see it flowing back out there and heading to the PS5, Xbox One, and Xbox Series X as well in 2021. Not only that, but it looks like Aragami 2 will be picking up the story we had from before and jumping forward one hundred years to show off how the clan is still fighting to survive. Something that is also getting a little change in the gameplay we have to look at.

Do not worry if you think that means that we will not have the same stealth-action we know from Aragami, but it looks like we will have the option to play with more friends as it is the last three of the clan heading out to keep things alive. All of which in an online multiplayer setting if you so wish. Although you will still have the option to play the game solo for those lone ninjas out there. I know I am usually going that way and feel that is how I will enjoy Aragami 2, but that is not everyone out there. Especially when you see that it looks like more is coming to the combat system than before and a few other options for stealth takedowns.

From darkness, the Shadow clan has returned. Aragami 2 is coming to Steam, PS4, PS5, Xbox One, and Xbox Series X in 2021.

Take down your enemies with stealth kills and non-lethal takedowns or become the master of a skill based combat with high risk and high reward. This is an overview of Aragami 2 gameplay and coop features.

Did you expect to see another Aragami title out there or did you feel like it was coming with how much fun the first one was? Do you think it is a game that will work well with multiplayer or will that hold it back a bit? Will you still try to stick to the shadows of the world or will you go in with swords swinging more often than not? Let us all know what you are thinking down in the comments and then feel free to discuss it all as you wish. If we have more for Aragami 2, you know it will be on the site for you. Just be sure to keep coming back in for all of that and more.