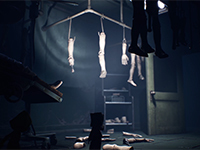 There is still a whole lot of time for Little Nightmares II to keep flowing before February 11th, but we have some new gameplay to help sell us on the game a bit more. It is a title that seemed to come out of nowhere swinging from Tarsier Studios the first time and they are not holding back here again when it comes to the creep factor of the game. It is something that Little Nightmares brought so well the first time. It feels like it would fit in better with an October release but seeing as it is coming to the PS5 and Xbox Series X as well as the PS4, Switch, Xbox One, and PC, I guess it makes sense.

What we have here for the new footage for Little Nightmares II shows off how the two will running through this messed up world to make it through Pale City and all the weirdness the residents will bring. It looks like the platforming and puzzle-solving we will have here will be a little more involved than before. Something that is always a welcomed thing in-game as long as they are done well. That is not to say that I do not have faith that Little Nightmares II will not do that, but it is something to keep an eye on as we march forward in the cycle of it all.

In a cruel world, a lonely boy finds a mission and a friend. Ride the line between excitement and terror as you run, jump, sneak, and fight your way through the Pale City and its Residents with Six by your side. Stop the Transmission before it can stop you, and you might survive.

Did you have a chance to play Little Nightmares before or will you need to play a bit of catch-up before this one comes? Do you think it is getting a bit darker in tone here or is it about what you remember? Do you think that we will have some vastly different gameplay here or will it all just be the next step for it all here? Let us all know down in the comments and then feel free to discuss it all here. When we have more to share for Little Nightmares II, we will share it all here. Just be sure to keep checking back in for all of that and much more.