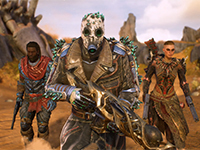 If you wanted more for Outriders then you are in luck as we have the latest broadcast out there for the game from People Can Fly. The big thing is that we finally have the final character class for the game in the way of the Technomancer. A class that can manipulate the lost technology and gear for the benefit of the team and the reclamation of the planet. Also a bit more on how the class will mix in the long-range and healing capabilities in Outriders when it finally launches on the PS4, PS5, Xbox One, Xbox Series X, and PC. All to keep us in the mix of a new co-op shooter around the launch of all of the new systems out there too.

In addition to the reveal of the Technomancer, we have a bit more of the co-op gameplay to look at and a full breakdown for the Devastator in Outriders. A class that is more of a tank and close-up shooter in the game. They also have the ability to manipulate the ground and some of the forces within it. From taking large leaps to catching bullets in the air to calling forth the ground to impale enemies where they stand. All while healing by the deaths of those nearby in the fight. A different way than we have seen for the other characters in Outriders so far, but makes sense for the class that we have here. It would be hard to be a tank if there has yet to be a dedicated hearing in the mix.

Square Enix today unveiled the final class in the highly anticipated RPG-Shooter, Outriders, the upcoming game from People Can Fly, the developers of Gears Of War: Judgment and Bulletstorm, and Square Enix External Studios, the minds behind Sleeping Dogs and Just Cause.

Working alongside Devastator and Pyromancer teammates in an intense trench warfare battle, the Technomancer takes centre stage, showcasing their abilities during one of the many challenging battles players will experience in Outriders.

Featuring a truly free-form blend of weapons and powers that will turn you into a superhuman god of the battlefield, Outriders is an aggressive, intensely brutal RPG-Shooter experience that challenges you to define your playstyle and master the synergies between your powers, class builds and equipment. Play alone or team with up to two other players and create deadly combinations as you journey across the dangerous and hostile planet of Enoch.

What are your thoughts on the Technomancer for Outriders that we have here? Do you think it will be a nice mix to keep us at a distance as well as in the mix or will it depend on how we fill out the skill tree? Do you think that the Devastator will be your class or will you be leaning toward one of the others out there? Let us all know down in the comments how you are feeling about all of this and then feel free to discuss it all. If there is more to show for Outriders, we will add it all here for you. Be sure to keep checking back here to keep up to date on all of this as we head toward the launch of the game.