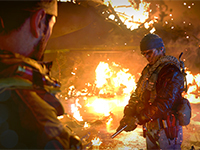 The first reveal for Call Of Duty: Black Ops Cold War is here to show off how the campaign of this Call Of Duty experience will flow and look

The wait has ended and we now have our first real look at Call Of Duty: Black Ops Cold War and just what it will be bringing to the PS4, PS5, Xbox One, Xbox Series X, and PC this year. November 13th of this year to be more exact with the game dropping on the next-gen systems as soon as they are available. Something that looks absolutely like a blast of a time as we have a new campaign here that will be following up after the events of Call Of Duty: Black Ops and into the early 80s. You know, right around the time that the title of the game states we will be in. Also with all the weapons and gear we would expect to have as we try to foil a global plot across the globe.

This trailer focuses a whole lot on the story for the game and less on the new multiplayer coming to Call Of Duty, so if you are not a fan of the whole experience then you might be left out a bit. This is all captured on a PS5 so it is something to take in for the power of the next-gen systems, but it looks like it will be all campaign with hints at what will be coming to the multiplayer and War Zone after it launches. Maybe a bit more for the post-launch content too as this Call Of Duty title is not going to be left out of that extra bit of cash they can snag up. I am just glad to see that we are going to be getting a campaign again and the rest is all gravy. Even though I know I am the odd one out here.

The iconic, #1 selling series in Call Of Duty history returns to fans around the globe with the all-new Call Of Duty: Black Ops Cold War. A direct sequel to the original, fan-favorite Black Ops, and set in the early 1980s, Black Ops Cold War, drops players into the depth of the Cold War’s volatile geopolitical universe in a gripping experience where nothing is as it seems. In addition to the story campaign, Black Ops Cold War will bring an arsenal of Cold War weapons and equipment into the next generation of Black Ops Multiplayer combat, and an all-new co-operative gameplay experience with Zombies.

Developed for next-generation consoles by Treyarch and Raven Software, Call Of Duty: Black Ops Cold War is scheduled for release on PlayStation 4, Xbox One, and PC on Battle.net starting November 13th with versions for PlayStation 5 and Xbox Series X to release in Holiday 2020, depending on when consoles are available to consumers.

In pure Black Ops style, Call Of Duty: Black Ops Cold War fuses elements of 1980s pop culture through a mind-bending conspiracy story, where deception and subterfuge are the norms in the gripping single-player Campaign. In this sequel to the original Call Of Duty: Black Ops, players encounter historic figures and learn hard truths as they battle around the globe through iconic locales like East Berlin, Turkey, Vietnam, Soviet-era Moscow, and more. As elite operatives, players attempt to stop a plot decades in the making as they follow the trail of a shadowy figure named Perseus, who is on a mission to destabilize the global balance of power and change the course of history. Beyond the Campaign, players will bring a wide selection of Cold War weapons and equipment into the next generation of Multiplayer combat and an all-new Zombies experience.

The title features cross-play support across current and next-generation systems with cross-progression across all modes. Call Of Duty: Black Ops Cold War will also offer a Battle Pass system and deliver a steady stream of free post-launch content, including multiplayer maps and modes, Zombies experiences along with a robust schedule of in-game community events.

How pumped up are you for this new Call Of Duty and are you glad to see that we are getting a true campaign again? Do you think we will have a longer story here or will it just be there to help sell the multiplayer? Do you think we will have to pay for the upgrade to the next-gen systems or will that be a free update for those who pick it up early with new adopters being the only ones that have to buy the whole game? Let us all know what you are thinking down in the comments and then feel free to discuss it all as you wish. When we have more to share for Call Of Duty: Black Ops Cold War, you know we will have it all on the site for you. Just be sure to keep checking in for all of that and much more.