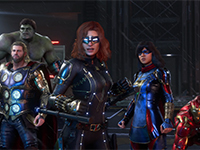 In just over a week from now we will be diving into a final build for Marvel’s Avengers to take on the issues that A.I.M. is causing in the gaming universe. Things we have experienced a slight bit in the last month with the beta that Crystal Dynamics put out there. Something that felt a bit more like an extended demo more than an actual beta, but we will see how that will all play in on September 4th here. There should be a whole lot of new updates for Marvel’s Avengers by then with all of the other fun things we should be seeing for the game in the next War Table. That does not mean we do not have something a bit more fun to look at here.

As mentioned, we are going to see A.I.M. out there causing issues for the Avengers with M.O.D.O.K. at the lead. This is something we are seeing focused a bit more in this launch trailer we have here that also highlights a bit more of the personalities for the characters in the game. It is still odd to see that we will have Captain America for a short bit in the beginning and then watch him die, but I am guessing we will have a resurrection at some point in the campaign of it all. All so we can give the other Avengers a little more of a highlight and have someone else drop the iconic line to bring them all together.

"You're already a hero. The only one left to convince is yourself."

Watch the Marvel’s Avengers Launch Trailer now and prepare to Embrace Your Powers on September 4!

Are you ready to finally head out into this new Avengers saga or will you be holding off to join post-launch? Do you think this will have a smooth launch unlike other titles in the same vein or will it see its same issues as we always do with online games? Who do you think will be the next character added to the global roster here and will it be someone we would never suspect? Let us all know down in the comments and then feel free to discuss it all. If there is more for Marvel’s Avengers, we will certainly have it all here. Just keep checking in for all of that and much more.