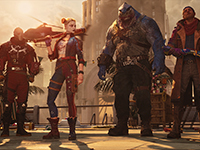 The full announcement for Suicide Squad: Kill The Justice League is here with the Suicide Squad taking place in the Arkham universe

If you were not on the internet or watching the DC Fandome over the weekend then you may have missed out on the official announcement for Suicide Squad: Kill The Justice League. We had that nice little tease from Rocksteady earlier on to build up to this big announcement and now we are here. The next title set in the Arkham universe where the title kind of says it all. The Suicide Squad is going to be tasked with going out and kill the Justice League. After what looks like they have been taken over by Brainiac by some means and Task Force X is somehow unaffected. Something we will fully understand in 2020 when the game hits the PS5, Xbox Series X, and PC. Okay, that is a bit of a wait now…

As far as something to see for Suicide Squad: Kill The Justice League, we have a nice cinematic trailer to show off the feel and theme of the game but no real gameplay to see. You can see that below and then take a few notes as to what will be going on in the game. In the game, we will have the option to play the members of this Suicide Squad (Harley Quinn, Deadshot, Captain Boomerang, & King Shark) in an open world with single up to four-player co-op. All in the version of Metropolis the team has put together for us to enjoy with one of the targets being Superman. It does sound like the game will all take place here and the title suggest that we will need to take down more of the League, but so far this is what we have. I am going to guess that Batman will not be on the hit list based on the universe, though.

Warner Bros. Games and DC announced Suicide Squad: Kill The Justice League, a new genre-bending action-adventure shooter that can be played solo or with up to four players in online co-op. Based on iconic DC characters and developed by Rocksteady Studios, creators of the critically acclaimed Batman: Arkham series, Suicide Squad: Kill The Justice League combines the studio’s signature character-driven story gameplay with third-person shooter action to deliver a gaming experience unlike any other. The game will be available worldwide in 2022 on PlayStation 5, Xbox Series X, and PC.

Featuring an original narrative set in the DC universe, Suicide Squad: Kill The Justice League takes place in a richly detailed open-world Metropolis. The story follows Suicide Squad members Harley Quinn, Deadshot, Captain Boomerang, and King Shark who must take on an impossible mission to save Earth and kill the world’s greatest DC Super Heroes, The Justice League. Restrained with lethal explosives implanted in their heads, all four DC Super-Villains have no choice but to band together and carry out this untenable assignment as part of Amanda Waller’s infamous Task Force X. Fans can tailor their experience, whether playing on their own as a single-player, switching between characters at will, or teaming up with friends in multiplayer co-op.

The playable characters featured in Suicide Squad: Kill The Justice League are Harley Quinn (a.k.a. Dr. Harleen Quinzel), the mistress of mayhem; Deadshot (a.k.a. Floyd Lawton), the most dangerous marksman alive; Captain Boomerang (a.k.a. Digger Harkness), Aussie assassin extraordinaire; and King Shark (a.k.a. Nanaue), the demigod humanoid shark and rightful ruler of the seas. Each squad member has their own unique move set with enhanced traversal abilities to freely explore the dynamic open-world of Metropolis, along with a variety of weapons to customize and skills to master.

Are you excited to finally get to play as members of this Suicide Squad or would you have rather had other characters in the mix? Do you think that Superman will be one of the final members of the League to take down or will he be the first? Will we get to see more than just Metropolis in the game or will this be completely set in this open-world and nowhere else? Let us all know how you are feeling about all of this down in the comments and then feel free to discuss it all. We will have more to Suicide Squad: Kill The Justice League and you will want to be back here for all of it.