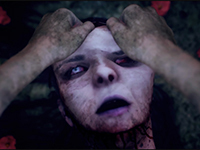 It has been a good amount of time since we last heard something for Martha Is Dead and now it looks like we have some big news that the game will not only be hitting the PC in 2021 but also the Xbox Series X when it comes. It would seem like the best move for LKA and Wired Productions to aim for all the platforms that they can with this title, and it is going to expand out at least once here. I am always hopeful for all the platforms, but I will take what I can. especially when this announcement also comes with a rather grim new video for Martha Is Dead to show off some of the horrors that we are going to get to experience when all is said and done.

As mentioned, we have something new to look at for Martha Is Dead titled "The Lake." Given that the story of the game is going to revolve around a female body being found in a lake, I am going to guess that this is the titular Martha here. What is interesting to see is that we have glimpses of the potential killer in the game as he is slicing off a face and then putting it on. All in a first-person view. Something that makes me wonder if we will be playing part of Martha Is Dead from the side of the killer or as the killer the whole time. It is not a totally new take on it all, but something that is not always done in horror games. I guess we will just have to wait and see for now.

Martha Is Dead — The Lake

It’s 1944, and the body of a woman has been found, drowned and desecrated, by the side of a lake in the depths of the Italian countryside. Martha is dead, and now her twin sister must deal with the fallout from her murder, whilst the horror of war draws ever closer…

Martha Is Dead is a first-person thriller created by LKA, the team behind award-winning The Town of Light.

It merges the beauty of the Tuscany countryside with the encroaching ugliness of war to create a psychologically impacting story based on real history, superstition, darkness, and dreamscapes.

Does this new video for Martha Is Dead creep you out as well as it should or is it about on par with some of the dark films out there? Do you think we will see a release on all of the major players at some point for the game or will this be the last of the platform updates? Could we be playing as the killer in the game or will this be a weird scene we have to watch in the game and nothing more? Let us all know down in the comments what you are thinking and then feel free to discuss it all. If we have more to share for Martha Is Dead, you better bet that we will share it here. Just keep coming back for all of that and more.