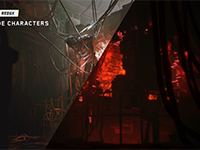 A new look at how Observer: System Redux will be evolving the visuals of Observer for the next-gen systems is here

There has never been any doubt that the PS5 and Xbox Series X will be able to throw out some amazing visuals, but now we have a better look at how Observer: System Redux will look over there and just a bit of the power the new systems will have. I guess, we should still say potentially have as it is on the developers like Bloober Team to make games look overly impressive with the new hardware. Something that we can see is happening really well here for Observer in the latest video we have for the remastered version of the game. It looks like this will be more than an upgrade to get the game running on the systems when they come out but some true overhauls to keep this one going as the scariest cyberpunk game to date.

In the following video, we will get a chance to see how things in Observer will upgrade due to the new lighting capabilities and new textures that the team will be adding in. It looks like the character models for everyone will have a bit of an upgrade to take full advantage of things too. That has to be one of the bigger highlights in the video here besides the new lighting. Although, I do not remember things in the original Observer being as hazy and blurry as we see here, but it could just be that the newer stuff looks so great that I have had those rose-colored lenses removed from the first work.

Get a first look at some of the new features in Observer: System Redux! One of the scariest cyberpunk stories has been rebuilt and augmented for the next generation.

Veteran Observers can dive deeper into this dystopian reality thanks to expanded gameplay and brand-new story content, while newcomers will get the chance to experience this cyberpunk thriller in all its chilling next-gen glory.

Considered one of the scariest games currently available, and one the best cyberpunk games coming to next-generation consoles, System Redux is the definitive vision of this thriller tale, coming for the 2020 holiday season.

Do you remember Observer looking as shabby as we see here or is it all to better highlight the upgrades coming this Holiday Season? Do you think this is a true telling of the new hardware or just the start of it all with this being something around the launch of them all? Will this have you going back into the game to see the finer details we might have missed or is it still to horrific for you to do that? Let us all know down in the comments and then feel free to discuss it all. If we have more to share for Observer: System Redux, we will have it all here on the site. Be sure to keep checking in for all of that and much more.