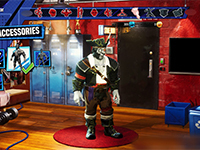 With September 18th not that far off, it is time to have a look at the various gameplay modes we will be seeing in WWE 2K Battlegrounds. Yes, there will be more than just the assumed modes that generally go along with the TV and PPV entertainment that is brought to us. Saber Interactive and 2K Games would not have a solid title on their hands besides the other versions of the WWE we have seen in the past without this. Well, maybe they would given the fanbase, but here we get to see what else will be out there to draw in more than just the general fans and the gaming community at large.

Okay, there really is not much in the way to mix things up outside of what the WWE normally gives us when you look at these modes. We will have the normal 1v1 and Tag Team matches, a Triple Threat, Fatal Four Way, Steel Cage, and the Royal Rumble. Also a King of the "Battlegrounds" (Hill) style and all of that normal jazz. We will also be getting a nice little campaign mode in WWE 2K Battlegrounds where our superstar will have to go through the normal paces of a wrestler all told through a comic book style of scene between matches. Something that sounds a lot cooler than just getting in and beating each other up. Given the art style too, it would feel like we will actually get to enjoy our creation instead of a generic one made for the game. Pretty damn cool here.

The legendary Paul Heyman reads you a story about all the ways you can Brawl Without Limits in WWE 2K Battleground’s many wild and unpredictable game modes including:

Throw down in this single-player story mode told through a comic art style as you add to your stable of WWE Superstars to overcome the next challenge. Team up with Paul Heyman and Stone Cold Steve Austin as you travel the globe in search of new Superstars for an all-new WWE brand. Play as one of the seven newly-created Superstars, such as Bolo Reynolds and Jessica Johnson, as you travel across several regions battling WWE Superstars, achieving campaign goals and unlocking various WWE Superstars, power-ups and items.

Brawl with your friends or family, with up to four-player action online or on the couch in your favorite match types, including:

King of The Battleground Mode

Battle to become the Last Man (or Woman) Standing as you and up to seven other online players burn it down and try to toss one another out of the ring! The longer you stay in the arena, the higher your score climbs. The second you send someone flying, another Superstar waiting outside the ring enters the fray.

Take the action online for rewards in a variety of time-limited tournaments featuring a wide range of win conditions. Keep an eye out… you never know when a new Battlegrounds tournament might be kicking off.

Brawl from the bottom all the way to the top! Create your own WWE Superstar and overcome all the odds stacked against you.

Are you at all surprised that we will be getting the usual matches and modes the WWE is known for or did you have hopes of something truly new? Do you suspect that we will be limited on customization options for the campaign mode or will it be fully open from the start? Do you even care about all of this and have already thrown down the cash due to your super-fandom? Let us and the world out there now what you are thinking and then feel free to discuss it all. If there is more to share for WWE 2K Battlegrounds, you know we will have it all here. Just be sure to keep checking in for all of that and more.