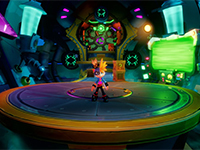 A new and long look at Crash Bandicoot: It’s About Time came out of the big State Of Play event yesterday and for those that missed out, we have the slice of it all. It was slipped in as a beefy little thing from Toys For Bob as they dove into all the changes and additions we can all expect to have here in the game. It has been a long time since we had a great Crash Bandicoot title so it would make sense that we would be getting something to showcase the IP and keep us all wanting more after October 2nd. I am sure we will be playing well after that launch date there, but it is all about keeping us wanting to come back with this title and not setting it down for the next big thing.

That all said, it looks like we will be able to play as more characters than just Crash Bandicoot here with past villains coming back as playable in the story and the option to play that whole game as Coco if we want. Something that could be fun with all the cosmetic unlocks we can get in the game as we use the four different powered masks to alter the world around us and complete levels. All of which are the standard style we would expect with the fourth one left a mystery. Given that we will have various other methods to replay all of the levels than just score more collectibles, I have a feeling it will be tied to that somehow. I guess we will see in the not-too-distant future here. Have a look and see it all in motion just below.

It’s About Time – for a brand-wumping new Crash Bandicoot game! Crash fourward into a time-shattered adventure with your favorite marsupials.

Neo Cortex and N. Tropy are back at it again and launching an all-out assault on not just this universe, but the entire multiverse! Crash and Coco are here to save the day by reuniting the Four Quantum masks and bending the rules of reality.

Are you fully ready for a new Crash Bandicoot title or was that something you have been ready for the last decade to have? Do you like the fact we are getting more characters to play here or will you still stick to one the whole time? What looks to be the coolest level warp that you can see going back to so far and will it be more than just painting the world as an added gameplay feature? Let us all know down in the comments and then feel free to discuss it all as you wish. If there is more to share for Crash Bandicoot: It’s About Time, you know we will here. Just be sure to keep coming back for all of that and much more.