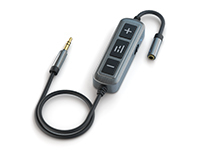 We sit down and review the HELM DB12 AAAMP Cable. A new accessory that could kick up the audio options for your mobile pleasure.

We have all been there before when our normal headphones for our mobile devices just do not cut it. Maybe they are not truly noise-canceling or just cannot give us the output we normally want with our music and games. This is where the HELM DB12 AAAMP Cable aims to step in and give us all a bit more aid to this. Some of us do want to be able to have some THX quality sound in our ears when listening to music or taking some of our video games on the go. Thankfully, we have had a chance to put the HELM DB12 AAAMP Cable through some of its paces here and are ready to give you our review. Here is how it all went over here. The first thing that I know many are going to see and say for the HELM DB12 AAAMP Cable has to be that it is a new and slightly bulky extra thing to hang out of your device. Bulky, at least, relative to most of our mobile devices out there. Not only that, but it does require a headphone jack which eliminates a portion of users out there. This is not a huge hang-up for the cable but something that can turn many users off from it. It was not a huge issue for myself as it was obvious as to why the HELM DB12 cable needed the size but during my time it was a little cumbersome if I wanted to be mobile while listening to music and the like. You can read that as another item that had to fit into workout clothes or a pocket while on the go.

Another gripe I have about the HELM DB12 cable is that when in a mobile device, it does not seem to play well when answering a call or needing to use a built-in microphone on the headset. While on a walk I had a call come in and I had to fully disconnect for the other party to hear me. Also, while on my PC I had to use a separate microphone to speak to others while in a game or in a meeting. This is not always the intended use for the device but as I was using it in an everyday setting, these were things I came across. It can be a rare moment where I can just plug in without the worry of the outside world interrupting and it would have been nice to not have to take a few more steps to be able to handle things and get back to my enjoyment. I have been trying to find better words than this, but when it comes to the audio quality that the HELM DB12 cable helps to pump out it feels like magic. I tried on various different headsets and earbuds to see if there was a difference and no matter what I plugged into it, everything sounds crisper and cleaner. In fact, it took the audio from some of my "throw-away" or cheap earbuds, and the quality of the music, film, and gaming audio sounded as if I was using some pro-level headphones. This was not expected at all as on paper it looks like all this would do is raise the volume a bit. At least for one that is not a huge audiophile. I was so floored by it that I opted to keep using the cabled option for things instead of the wireless I have grown accustomed to as of late.

In that regard, too, I also tried using the HELM DB12 cable on the PS4 and Switch to see if the same would carry over. Outside of the few above issues I listed, the audio that came out was almost to the same level as my home audio system. Slightly better for the Switch given that system's capabilities. The great bonus here is that I could get this quality no matter where in my home or out and about I was. Imagine being able to take your best sound system wherever you went but never had to lug more than this cable. That is what it was to me and made the slight drawbacks instantly vanish while I hid away in my games. Extrapolate that to the films and shows and you can get at least that part of a big theater feel right now too. Plain and simple, the HELM DB12 AAAMP Cable is not going to work for a portion of you out there given your preferences and devices you carry. It is what it is there. In terms of audio, I do not think I can pile on enough praise for this device and what it was able to offer while on the go. The battery life on it never ran out for me, but I did not take any extremely long treks so take that in too. The fact that it could turn a basic mobile device into a theater-quality setting even with some very low-end headphones has to be the biggest selling point. For that, I do not think I can recommend it enough. I do wish it was a bit smaller than what it is but if that is the only real hold up then you would do well to add this to your audio arsenal.

I give the HELM DB12 AAAMP Cable 7db on the db scale.

The unit was provided by Helm Audio for review purposes.