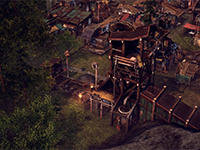 A new update for Endzone: A World Apart is here to give us all a few more ways to handle the deadly radiation in the world of Endzone

Everything keeps expanding for Endzone: A World Apart, as we have another update out there for the game and this one offers up a new way to handle some of the radiation the world is going to throw at us. Obviously the water supply in the world will have issues and now the food supply will too, so Gentlymad Studios has placed in two new building types into the game to help us reduce all of those issues. Not only that, but it looks like we will have the inclusion of iodine into Endzone that can be refined and used to remove some of those conditions placed on us from the extremely harsh world we need to survive in. An interesting addition to things as the Early Access rages onward.

You can have a look at the two new buildings for Endzone just a bit lower down the page but there is a little more to this update than just that. As with all of the other updates, we will see some new missions, excursions, and other events added in. Most likely to capitalize on these new additions and add to the dynamic gameplay we have been able to enjoy thus far. It would be extremely odd if that was not the case here, as radiation poisoning should be a huge concern in the world of Endzone as we deal with heatwaves and starvation in the mix.

The irradiated environments in the post-apocalyptic survival game Endzone: A World Apart are merciless and utterly unforgiving. So today, the developers have released a new update that gives the power back to the people by giving them buildings to protect themselves and their supplies!

The Mine, much like the Decontamination Post, is another helpful anti-radiation tool in that it provides refugees with both iodine and coal. Iodine can be processed into tablets in medical facilities, and, when given to settlers, can free their bodies of radiation and prevent general radiation poisoning. All of these efforts, when combined, will increase the life expectancy of settlers who’d otherwise have gone to the “other side” prematurely due to their toxic surroundings.

Are you still enjoying Endzone or do you take breaks between each of these updates to stop from burning out? How deeply do you think this will affect the game's world and people? What do you think will or should be the next addition to all of this? Let us all know down in the comments and then feel free to discuss it all as you wish. As more for Endzone: A World Apart drops out there, we will pick it up for the site here. Be sure to keep checking in for all of that and much more as we head forward into the development cycle and beyond.