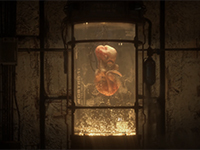 We had a tease for S.T.A.L.K.E.R. 2 with nothing more than a screenshot and a title card for the game, and now we are back with a whole lot more. Not only do we have the first official trailer for the game but we also have word that GSC Game World will be bringing the game over to the Xbox systems as well. Which systems? That seems to be a bit hazy as it could be both the Xbox One and Xbox Series X. That is on top of the PC release. We just know it will be there and given that S.T.A.L.K.E.R. 2 will be coming out during the new life cycle, I will venture it will be on the newer system more than likely and without a need for a patch update.

Moving along from that, we do have our first look at S.T.A.L.K.E.R. 2 here running just as pretty as the aforementioned screenshot made it out to be. There is a whole lot going on and the game looks like it could go into some darker places than before with all of the new hardware out there. Something that will be needed to highlight more of those branching story lines and endings we can get in S.T.A.L.K.E.R. 2 here. Even if it feels a bit on the lighter side of content, this one has my attentions piqued for the game. As if they were not already before this little showing we just had.

Along with the first trailer, there are several pieces of info to be disclosed:

How are you feeling about S.T.A.L.K.E.R. 2 after seeing this new footage here? Do you see how it lines up with the screenshots we have had already and how it could push things a bit further? Are you curious on the vague nature of platform announcement and do you suspect it will hit all the big ones of the current and next generation along with the PC? Let us and the world out there know what is on your mind here and then feel free to discuss it all. If we have anything further to share for S.T.A.L.K.E.R. 2, you know we will have it all here for you. Be sure to keep checking in for all of that and much more.