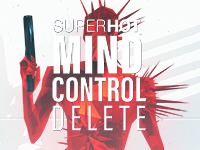 If you have been waiting for more SUPERHOT after all the different options you have had before, then get ready for the next one to come out from SUPERHOT Team here. A fully new title into the franchise that uses our movement to dictate the movement of time in the game's world. All of which you should have known by now when it comes to this. If not, then get ready to dive into our thoughts on the latest as we review SUPERHOT: Mind Control Delete. The next big mind-bender where we will need to take down various "glass people" while shifting time around. Out there now for the PS4, Xbox One, and PC.

We are back at the computer again to take our avatar through various scenarios to unlock more nodes all to get more for it all. The theme is more here even if it is hard to follow along what we are going for here besides the gameplay of it all. Maybe I missed the mark, but there was not a specific story I was able to follow besides what I am offering up here. Unless I have been hacked and mind-controlled into the meta-narrative of it all…again… After playing SUPERHOT: Mind Control Delete for a bit, there was one thing that always seemed to grind on me more and more. That being the true repetitive nature of it all. Not that there has been much of an expectation that would not be the case here, but it seemed to be much more here. This could be due to the fact that "mission" areas for each all felt roughly the same or something that I will mention more below. It just felt like I was playing the same thing over and over with only a few little changes based on the "Hacks" I unlocked along the way. It has been kind of the way that SUPERHOT has been, but after a while, it made me want to set the controls down and try something different. It was like a grind that had even less of a payoff than other titles out there. This could just be me.

To add to that, as I alluded to above, another thing that seemed to be a driving point here was being able to move an adapt to the game as needed. This never seemed to actually stick as the same scenarios only seemed to ever mix in more enemies that I could not see. Not that they were hidden around corners or anything, but many times running around with only their weapons flying in the air and quick death following for me. I am not sure if that was what was supposed to happen here, but it further compounded the repetitive nature of things with the many deaths that would occur because of this. If the total of SUPERHOT: Mind Control Delete was designed to live-die-repeat it would have been different. Sadly, this just led to more frustration and feeling like I was in an endless circle that had no ending in sight. I always loved the movement mechanics from SUPERHOT before now and they do come back in a strong way here for SUPERHOT: Mind Control Delete. It always gave that feeling of being a film badass by being able to plot and plan out attacks, dodges, and movement to take everyone and everything down as smooth as possible. Mixed in with the ability to replay the scene in a real-time manner so you could see it all was an amazing touch. I think I captured more clips of this on my PS4 more than most other titles out there as they always looked so cool and fluid once time was fully resumed. This may not be one of the core features we should focus on in the game, but it was a lot of fun to see all of that and try to perfect it during my time with it all.

Another aspect I really loved, as weird as it will sound, was the different ways to wield and use items throughout the world of SUPERHOT. It also builds into the above aspect, but I found along the way other ways to mix things in and it was always an exciting revelation for me. One that stands out was in a room where there were multiple gunmen and only darts to use. From the start, it always seemed like a way to stun the enemies to take their weapons, but trying a few things I found a few other ways that could completely take them down and look just as cool doing it. It did take a whole lot of repeat plays for this to come about, something I know I had an issue with for SUPERHOT: Mind Control Delete, but it was nice to have those pop up every now and then. Plain and simple, if you were a fan of SUPERHOT you will most likely be a fan of this one too. It seems to bring back everything that players loved from before and give us just what we were craving with "more." I will say that SUPERHOT: Mind Control Delete felt a bit more repetitive than ever with the fewer level options and the constant need to replay them. This could have been due to a weird glitch I encountered in the game or, if it was not a glitch, my lack of being able to take down the many invisible enemies out there. I had fun while playing it, but it is doubtful that I will be going back in fore MORE after this experience.

I give SUPERHOT: Mind Control Delete 4 H4cK$ on the H4cK$ scale.

SUPERHOT: Mind Control Delete was developed and published by SUPERHOT Team for the PS4, Xbox One, and PC on July 16th, 2020. A PS4 copy of the game was provided by the publisher for reviewing purposes.