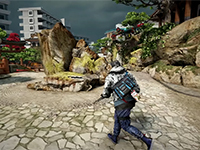 The fun of World War Z carries on as we have yet another free update here for the game and it is a big one. Big in terms of the fact it brings more of the new weapons, fixes, and character class to play. Also big as it looks like Saber Interactive has bridged a huge gap in the PvE function of the game. World War Z is now going to be able to be played across all platforms as of this update. Now the PS4 gamers will be able to join in the fun that the Xbox One and PC gamers have had for a bit now. Time to download a new patch and see what else has changed in this ever-growing world the team is building.

As mentioned before, this update for World War Z will also bring in the Dronemaster class for us to have fun with. As the name alludes to, this one will have a drone that can be deployed for the user that will have various other functions as the game progresses. It will start out with a simple taser system to take down any zombies that get close to you with upgrades that can make it a truly lethal protector too. If that is not how you want to play your World War Z, you can also go down a path where it will aid your allies as you stay at a distance and help from afar as well. A pretty update to have here and see in motion.

Saber Interactive and Focus Home Interactive have announced that the “Dronemaster” update is available to download for free today in World War Z, the best-selling co-op shooter inspired by Paramount Pictures’ blockbuster film. This latest update introduces full PvE crossplay support across PlayStation 4, Xbox One, and PC via the Epic Games Store, letting you party up in co-op with friends no matter what platform they’re on.

World War Z has also released its first new playable class since it launched last year: the Dronemaster. This highly versatile character comes with its own personal drone which stuns zombies when they get too close for comfort. You can customize your drone in the perk tree to suit your play style and squad comp: increase its offensive capabilities to make it more lethal in an assault, or raise its defensive powers to better support your team.

In addition, today’s update features a new rare weapon pick-up with its own upgrade tree for your armory: the ACW-20. This low-caliber, semi-automatic grenade launcher is perfect for mopping up tightly packed groups, but watch out for friendly fire! There’s also a variety of new weapon upgrades, perk rebalancing, fixes and quality-of-life improvements.

Finally, players can grab World War Z’s latest premium DLC today: the “Signature Weapons Pack,” which includes four unique weapon skins for the game’s main characters. This DLC is free for Season Pass and GOTY Edition owners. It is also available for standalone purchase on PlayStation 4 and Xbox One.

How amped are you that World War Z is going to go full cross-platform with this update? Do you think it will lead to a huge resurgence of players now that it does not matter the platform? What kind of player will you be with the Dronemaster and is this what you have been waiting for to get back into it all? Let us all know down in the comments and then feel free to discuss it all. If there is more to throw out there for World War Z, we will do it all here. Be sure to keep checking in for all of that and much more.