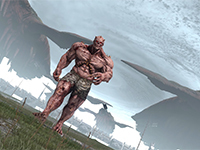 As we still wait for August to roll up on us with Serious Sam 4 to play on the PC and Stadia, we will need some solid looks to keep us going. Solid looks like the one that Croteam has dropped out there for us just days ago to look and to see just how the title has progressed. Some out there were a bit worried that we might never get to see this Serious Sam title, but for those still holding on, here we go with the next batch of gameplay to blow our minds. Well, more blow the minds of the enemies in the game, but that is just how it all rolls here. For the game and not here personally. I may have said too much…

You may have already skipped along to the video we have here for Serious Sam 4 or you might not have. If you are still reading here, I do have to say that it looks like we are getting the same kind of gameplay we have come to expect from the franchise. Also, that we have come to expect from others out there as it would be hard to tell this apart from the latest DOOM title right now. Enemies, weapons, and some locations all look and move about the same. I am not trying to detract from Serious Sam at all here, but it does feel like we have played this before sadly. This could also be how the video was clipped here and nothing more. Either way, have a look at what we have for the game right now.

Humanity is under siege as the full force of Mental’s hordes spread across the world, ravaging what remains of a broken and beaten civilization. The last remaining resistance to the invasion is the Earth Defense Force led by Sam “Serious” Stone and his heavily-armed squad of misfit commandos.

Croteam returns with a high-powered prequel to the Serious Sam series that scales up chaos to unprecedented levels. The classic Serious Sam formula is revamped by putting an unstoppable arsenal up against an unimaginable number of enemies that requires players to circle-strafe and backpedal-blast their way out of impossible situations.

Are you feeling the same way about this Serious Sam as I am or is it different enough for you? Could it just be how the video was put together or is it just fast-paced FPS burnout right now? Do you even care and will be throwing down for this title no matter what? Let us all know down in the comments and then feel free to discuss it all. If there is more to share for Serious Sam 4, you know we will share it all here. Just be sure to keep checking in for all of that and more.