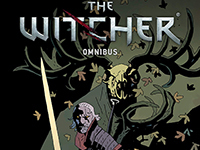 Needing to give yourself a break from Netflix and Games for a minute? Try reading The Witcher comics. Toss a Comic to your Witcher!

Looking for a Witcher fix while waiting for the second season to drop? Fans may need to hit the snooze button on this comic series, written by Paul Tobin and art by Joe Querio, Piotr Kowalski, and Max Bertolini. This five-run comic series was originally released in 2014, “Starting with House of Glass.” Honestly, we should be expecting more from this Eisner winning author who clearly phoned this one in. The story tended to drag on with little character development and little insight into our protagonist’s world. Give me some plot I can sink my teeth into, literally. I want to bite some monsters!

Even more disappointing, the art in this series falls short. Hey, who doesn’t want to see Geralt’s famous abs drawn to perfection? (I do!). I want to see the hair that slain monster’s chinny chin, bristling with perfection! They throw in standard Witcher fanfare, Geralt’s dry humor, plenty of monster killing, and a bathtub scene. Just not much of a plot to hold it all together.

The Witcher was published digitally by Dark Horse Comics in 2014, and based on the highly acclaimed video game series. A digital copy of the comics was provided by the publisher for reviewing purposes.