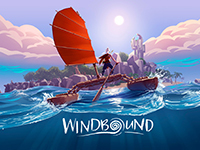 Here we go with one of the first real gameplay looks at Windbound here so we can try to figure out the best way to survive this world. For those that do not know, this is the next title on the way out from 5Lives Studios and Deep Silver for the PS4, Xbox One, Switch, and PC. With Windbound slated to drop on August 28th, it is nice to actually get a solid breakdown on how some the game mechanics and the world will be working. More so with how hard it could be to survive if you do not know how to properly sail a ship. It may sound weird, but keep reading and watching to learn a bit more.

Windbound is a survival game that will have us doing all the usual manners of gameplay to keep our character alive. The big difference here is that we should most likely always be on the move instead of setting up a home base. If you do not want to count our boat as a home base at least. We will need to move about the world and its islands to gather resources, kill creatures, and craft even more things to keep us alive while we head forward into a mystical side of things on another end. The video here does a much better job of explaining it all, but it is rare to see a game use tacking in the gameplay mechanics to get around in a ship. I do hope it works out well for Windbound and I know I will keep an eye on it.

In this gameplay first look Mitch Clifford, the co-founder and lead animator at 5Lives Studios, will take us through a few parts of the first two island chapter. You will get to find out a bit more about the mysterious towers and learn some hints and tips for hunting, crafting, sailing.

The islands are alive with magic and enchantment telling the tales of their origin and revealing the role Kara unknowingly plays in it as each artifact that she unearths unlocks a new clue to her past.

Have you been waiting for a good bit of gameplay for Windbound here or have you just found out about this title? Will it be weird to keep moving about instead of keeping a solid camp? Do you think that the tacking mechanic will be a turn-off for gamers out there who are used to a different system? Let us all know down in the comments. If I find more to share for Windbound, I will do so here. Please keep checking in on the site for those updates and updates for all other video games out there.