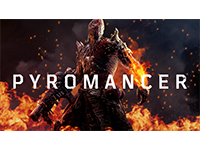 It feels about right after the explosion day we just had here in the States that we would have an update for Outriders surrounding one of the more explosive aspects. This being the second main class we will get to play in the game that is called the Pyromancer. I am certain this was not something that People Can Fly did not let go unnoticed and thus we are back again. I mean, also with a large amount of new gameplay to take in for Outriders as we watch the character show off its full range of abilities and skills we will get. Even if there is still more of the game that is "left for a later date" to be revealed.

As the name implies here, the Pyromancer will be a blasting character in Outriders that will use all kinds of fire and heat attacks to bring down the enemies. This could be through a few buffs, debuffs, or just straight throwing fire in their faces. It will also allow them to siphons off health as some of their burning opponents will regain the Pyromancer health. We just need to use all of the abilities and skills in a nice synergizing way to get the best bang for our buck with the class. That is also only if we are running solo, as we can see that in Outriders if we team up correctly we will be able to set them ablaze, freeze them for an ally to take on, regain some health, and then have that enemy explode. If we plan it all correctly.

Find out everything you need to know about the Pyromancer, one of Outriders four classes.

This spotlight will cover everything from who this class is for, how the Pyromancer's unique mechanics work as well as his skills, abilities and passives.

Did you have a feeling that the Pyromancer was going to be this level of a blaster in Outriders or did you think something sneaky was going to get pulled? Is it interesting to see that there is a full Tank build we can go with this class or did you think it would all be ranged? How do you think the higher-level powers will flow in and will they be just as devastating? Let us all know down in the comments and then feel free to discuss it all. If there is more for Outriders, you know we will have it all here. Just be sure to keep checking in for all of that and much more.