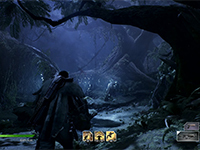 Here we go with another broadcast for Outriders here and we dive a bit further into how we are going to get around the world being built for us in this one. Not only that, but a bit more on how the progression is being set up by People Can Fly so we can flow through the main story but also have reasons to go back when we are done. That is if you are not planning on doing all of the side missions for Outriders right out the gate for it all. It looks like each area we will be going through will have about half of the map on the main path and then require us to go down side paths and missions for the rest. That does mean more gear to add to the arsenal along the way in this instance so there is more for those that do not want to just explore and learn of the world.

That level of exploration is also going to be a bigger thing in Outriders, as the video here also dictates on how there will be much more of the world out there if we so choose to look for it. I have a feeling it is going to be through basic texts or level cues more than anything, but there is a vast new world in this new IP that we need to discover. I guess it is a good thing that we will always be able to travel back to the various settlements and areas in Outriders after we think we are done with them. That or if we want to go level up a bit more and then come back and do an easier run along. The choices will be ours to have here.

This also means that we will need a good way to do all of this traveling in Outriders and this leads to the last big bit we will have here. It looks like we will have our own roving town where we go with a cast of characters playing our crew. They will all fit a role of some sort that we would find in the various settlements across the world of Outriders so we can make fewer trips if needed. What looks to be interesting here is that they will have some deeper story elements mixed in so there could be character-specific missions we will have to take. All to get the next best upgrade or piece of gear too. I guess we will see how that all flows out as we march toward the inevitable release of the game.

Before you explore the hostile planet of Enoch, discover more about the journey and structure of Outriders. Learn about story progression, side quests, hubs, and the snow-capped mountains of Eagle Peaks.

Does it look like Outriders is going to have one massive world to you or will it be only a small portion we will have to go to in the campaign? Do you like having the full crew that we are going to get or is it nice to try to survive to each location along the way? Will we have character-driven missions to make us all bond a bit more or is that hoping for too much here? Let us all know down in the comments what you are thinking and then feel free to discuss it all. If there is more for Outriders, you know we will have it up on the site. Just be sure to keep checking in for all of that and much more.