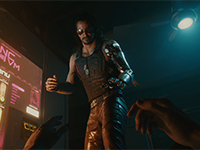 Now would be roughly the same time we would have had the latest update for Cyberpunk 2077 is the world was not shut down and here we are with another huge update for the game. Even if CD Projekt RED had to delay the game and then did the right thing with delaying the stream. We are just right back in the mix here with so much more to see for Cyberpunk 2077. Not only in the video game form, but also with an announcement for a Netflix anime coming to us in 2022. I hope that the game is still going strong by then with the PS4, Xbox One, and PC versions dropping on November 19th still. Maybe the PS5 and Xbox Series X updates will bring us all back in for more playing.

Anyways, first up, we have a new trailer for Cyberpunk 2077 to take us a bit deeper into a bit of the story and give us a look at some of our allies, enemies, and other things we will be experiencing along the way. Here we get to see a few more of the quest-givers and upgraders V will have to interact with. Along with a slight look at things outside of Night City and how some of the basic gameplay will flow in Cyberpunk 2077. Even as a work in progress here, it all looks amazing and I can barely imagine how it is going to look when all is said and done. Keep an eye out as we also have a look at a new gameplay feature here that will be highlighted in a different video.

Now that you have seen the story bits for Cyberpunk 2077, let us take a look at the new gameplay we are going to have here. Below is the full stream if you missed it, but near the middle of it all we have a look at a new gameplay mechanic called Braindance. The tabletop players should know this a bit but for the rest, it is a feature that will allow us to replay scenes of other characters to spot hidden clues and get a bit more understanding of things. It will also be used to share more of the story in Cyberpunk 2077. It will function like a video editing system that we can manipulate and isolate specific things in the world. If the augmented as some different upgrades it will allow for different details along the way as well. It is something we have seen in other games in the past, but it feels like it is being used for very different reasons here and I am excited to see if that is truly the case.

The first episode of Night City Wire is now available!

Join Hollie Bennett on a 30-minute trip to Night City involving the reveal of a brand new trailer, a fresh look at gameplay, plenty of developer discussion about the game with Paweł Sasko (Lead Quest Designer) and Patrick Mills (Senior Quest Designer), and the first look at a never-before-seen feature: braindance!

Has the hype for Cyberpunk 2077 spiked again for you or are you still needing more actual gameplay to sell you and not just some smaller bites? Do you suspect that we will use this new feature more that it seems or will it be used for more storytelling purposes instead of investigations? Will you still be interested in an anime so far out from the game's launch or will it be just like The Witcher? Let us all know down in the comments and then discuss the night away. We will have more for Cyberpunk 2077 soon and it will all be up on the site. Be sure to keep coming back for all of that and much more.