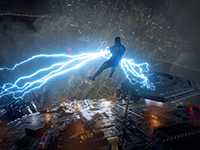 The day is finally here and we just wrapped up the first War Table stream for Marvel’s Avengers and gods was it filled with a whole lot of new information and gameplay. Given that we should have originally been playing the game right now, it felt like it was what Crystal Dynamics had to do and they came out swinging. Especially as the first missions we had here was all about Thor in the story and how it all builds back into the Avengers' main story. Even if this gameplay and first trailer only gave a slight look at the main villain of the game. That would be M.O.D.O.K. for those that have not just skipped along down the page already and moved over all of this text. There is close to twenty-six minutes of gameplay here to look at, so we know your time is going to be precious.

In addition to the gameplay, we also have a bit more on the core story for Marvel’s Avengers here as it builds into A.I.M. and M.O.D.O.K. It looks like Inhumans are being targeted here for the big attack from years ago as well as used as propaganda as to why super-powered individuals need to be rounded up. All so A.I.M. can do more tests and research on them. All of which is why we need to get the Avengers back together and take all of this on. That seems like only the tip of the iceberg here as some of the footage does show a few other heavy-hitting enemies, like Abomination, in the mix and also only the core of the story while leaving out all of the extra missions and events we can take on.

It does look like some of the Thor gameplay was a little lackluster compared to the footage we have seen in the past for Marvel’s Avengers. Maybe that was just me or how the player was handling it all, but it felt like it was missing that level of "epic" we were hit with last year. This could all change as we move forward and actually get to play ourselves or with our friends on the various systems. Something we also do not need to worry about with the next-gen systems coming too. Marvel’s Avengers will be freely updated to the new system and you will still get to play with your friends that have yet to make the upgrade too. That is all nice on how they will be bringing us all of this content for free.

The Marvel’s Avengers War Table offers players a world premiere look at new trailers, including the first showing of new Thor gameplay in his, “Once an Avenger” campaign hero mission. This playthrough follows The God of Thunder as he battles enemies with powerful lightning strikes, unleashes a barrage of Mjolnir attacks, and performs many other signature heroic moves solo and with AI Avengers teammates.

Lastly, Crystal Dynamics revealed brand-new information about War Zones, the game’s team-based missions, including their structure and how the Avengers become even more powerful when working together. War Zones can be played either solo with AI hero companions, or in co-op groups of up to four players. The stream also revealed more of the game’s world, from A.I.M.’s research facilities to a derelict Helicarrier, all of which can be explored by players to earn new rewards, gear, and experience points.

Marvel’s Avengers offers players a truly rich experience, with a combination of Hero Missions and War Zones. Hero Missions are single-player only and are part of the initial Campaign. They are designed to showcase each hero’s unique abilities as you reassemble your growing roster. War Zones can be played solo or with a group of up to four players as any Hero in your roster. Each mission dynamically scales based on the team size and player level.

Players in Marvel’s Avengers will also be able to customize Earth’s Mightiest Heroes in a number of ways. While each Super Hero will play true to their unique power sets, each will have the flexibility to play differently based on the gear you equip them with and the skills you enable, so no two player’s heroes will play in exactly the same way. Each hero has dynamic combo systems, Heroic moves, an intrinsic ability, and signature move sets to unlock and customize – many inspired by classic moves from the 80 years of history in all media, others crafted as originals just for this game.

Players also customize these iconic Super Heroes with classic, fan-favorite, and all-new original outfits inspired by over 80-years of Marvel history, including Iron Man’s suit from the 2014 Original Sin storyline, or Thor’s Donald Blake identity, which is a nod to an alias of Thor’s who first appeared in 1962’s Journey into Mystery issue 83.

Marvel’s Avengers is an ambitious game, starting with a global high-stakes race to rebuild the Avengers. But that’s just the beginning. To ensure a continuing heroic experience for all players, the narrative of Marvel’s Avengers expands, and threats escalate with each new post-release Super Hero, region and story arc delivered to players at no additional cost once they own the core game.

Finally, in case you missed it, earlier this week Square Enix announced that Marvel’s Avengers will be available on PlayStation 5 and Xbox Series X when the consoles launch in Holiday 2020. Players who own the current-gen version of the game will be able to upgrade to the next-gen version at no additional cost, regardless if players are moving from PlayStation 4 to PlayStation 5 or Xbox One to Xbox Series X. Those moving their saves to next-gen will transfer their player profiles and progression so they can pick up right where they left off. In addition, cross-gen play will be supported so PS5 players will be able to play with their friends on PS4 and Xbox Series X players will be connected with their friends on Xbox One.

What are your thoughts on Marvel’s Avengers after this new gameplay drop we have here? Do you think that M.O.D.O.K. is going to be the perfect threat for us or will there be something else as we get closer to launch? Who do you think will be the first added character to the mix and how will they make their money to keep this game ever-expanding into the future? Let us all know down in the comments and then feel free to discuss it all as you wish. We will keep the news flowing here for Marvel’s Avengers, so keep a close eye on the site for all of that and much more.