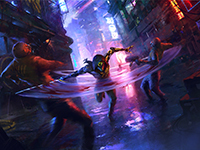 We have some new gameplay to take in for Ghostrunner here today and it looks to give us a bit more for the enemies and abilities in the game. At least somewhat, with there little much more to explain for the game besides the high-paced slashing out there. It still looks like a fun little bit to have here, but it would be nice to know exactly how we are going to be traversing in Ghostrunner. All of this seems like we need to make some assumptions with all of the parkour we can see here. It all looks exciting and fun, just a bit harder to understand how we will control it all.

As you can also see in this new trailer for Ghostrunner, we get to see some drones, shielded enforcers, and some other robots we will need to take down. That is why we have the Blink and Tempest abilities at our hands to get around and take them all down. About on par with how video games should go by giving us a challenge and then a way to try to bring them down. Even if it is all going to take some of our skill and not just handed to us in Ghostrunner. Again, just about how it should all go. All while looking insanely stylish in the setting here that should get us all excited.

Developers One More Level Games, 3D Realms, Slipgate Ironworks and publishers All In! Games and 505 Games, reveal new enemies, areas and abilities in Ghostrunner, the first-person cyberpunk parkour action game. Ghostrunner launches in 2020 on PC, PlayStation 4, and Xbox One.

What are you thinking about Ghostrunner here after getting this new gameplay? Do you think things will be shaken up in terms of abilities and enemies or will it flow just as smooth as the gameplay here shows? How do you think that we will be traversing the world or will it stick to a very parkour style bit we have seen in other games? Let us all know down in the comments and then feel free to discuss it all. When we have more to share for Ghostrunner, it will be added to the site here. Just keep tuning in for all of that and much more.