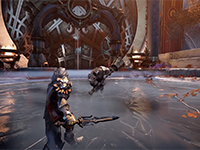 The teases are pretty much over for Godfall now, as we have the first real gameplay out there for the game running on the PC. It will most likely look similar on the PS5, but for now, we have Counterplay Games showing off what we can mostly expect in the game. It is all an early build of Godfall, but it is something to take in given that we have had so little. It is a new type of looter title with melee combat and other RPG elements gaining some extra focus but it still seems like the same process we have seen in a few other titles. Although, this is all its own thing and not something we should expect to be a copy of something else.

As you will see in this gameplay, Godfall will have us in that third-person combat mode using all different kinds of abilities and skills. Most likely there will be a few costume alterations on top of a few other things. It may feel a bit lackluster for what we have all been waiting for, but it does show us a bit more of how the world is going to look and flow in Godfall. It is not some CG cinematic or quick look at a character, so we can go on that. Maybe we will get something truly worthwhile in the near future as this does not really give us a good view of how the game will be. You can have a look at it all just a bit lower.

Take your first look at in-development PC gameplay of Godfall and the world of Aperion—a world on the precipice of ruin. You are the last of the Valorian knights, god-like warriors able to equip Valorplates, legendary armor sets that transform wielders into unstoppable masters of melee combat. Tear through foes as you climb through each of the elemental realms and challenge the mad god, Macros who awaits you at the top. Ascend in Godfall, the first-of-its-kind, looter-slasher, melee action-RPG.

Are you still looking for more to the gameplay for Godfall or was this enough to keep you interested in it all? Do you think this will be more than a hack-n-slash style game here or is it still too early to figure that out? How do you think the combat and motions in the game will flow for our controls or will it be something truly fluid? Let us all know down in the comments and then feel free to discuss it all. If there is more to see for Godfall, we will bring it to you here. We hope it will be something a bit more detailed than we have here today.