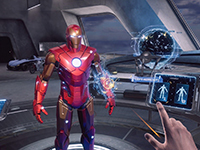 The next developer diary for Marvel’s Iron Man VR is here to show off how we will be altering the suit as we play through the game here. Something that seems a bit odd to do for the cosmetics in a PSVR title, but Camouflaj is giving us all of those suit options Tony normally has. Also how we will be upgrading the suit over time to keep out Iron Man ever expanding and improving to all the challenges we are going to face. All to help us feel more like Tony in his Malibu home and workshop we have seen many times over in all the various forms of media out there.

To go along with that for Iron Man VR, we have a look at the various other options we are going to have when we pick it all up. There will be a Digital Deluxe edition for the game that will offer us a bit more to the upgrades and a few different suits from the start. Also a soundtrack to Iron Man VR to enjoy as well. If you do not just want to go with the pre-order bonus of a different set of suits to be unlocked and a dynamic theme for the system. Pretty much only missing out on the extra upgrade points and other suits we will most likely get to unlock during normal play.

Go behind the scenes with the team at Camouflaj to see how they’ve crafted a complete Iron Man experience in Marvel’s Iron Man VR.

In addition to playing as Iron Man, discover how you’ll be able to embrace life as Tony Stark himself — exploring his Malibu mansion, interacting with Pepper, and customizing augments and iconic weapons in the garage to make the Impulse Armor truly feel like your own design. Are you glad we are going to see the various other Iron Man armors in here or does it seem off given the VR view we will have? Will you be shelling out for the few extras in the Digital Deluxe or will you stick to the basic version of it all? What other suit would you like to see in the mix or is it already in there? Let us all know down in the comments what you are thinking and then feel free to discuss it all. If there is more for Marvel’s Iron Man VR, you know we will have it all here. Just be sure to keep checking in here. We will have it all.